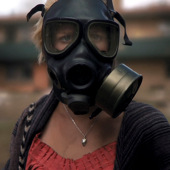 The best electronic-heavy sci-fi scores like John Murphy’s SUNSHINE and David Holmes’ CODE 46 transport you to a place that’s far more about hallucinogenic chill than it about bug-eyed creatures, or gigantic tentacled ones in this movie’s case.

MONSTERS stands as the most conversely beautiful, acid trip scoring done for a title like this, as rock synthesist Jon Hopkins takes the cool grooves he gave to Massive Attack and Brian Eno (particularly on his LOVELY BONES score) and applies them to a soundtrack that’s about learning to understand the enemy, if not necessarily making peace with them.

Never once descending into “horror” scoring as such, Hopkins’ haunting, spaced-out rhythms and washes of percussive, bell-like melodies blend with elegiac strings and pianos to make us hear the awe of witnessing these impressive visitors, though dark, breathing apprehension and voices are sure to keep us more than a few steps back.

In the end though, Hopkins’ unexpectedly thematic music reaches a level of electro-orchestral transcendence that equates two aliens’ electrifying mating dance with the emotional link of two gringo travelers who’ve braved them, proving that our cosmic and human species’ Zen attraction is one and the same.

Click on the link to purchase the MONSTERS soundtrack