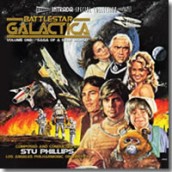 No expense was spared in ABC’s answer to STAR WARS, especially when it came to the music budget of its three-hour pilot. And if John Williams made a go of cosmic myth making with the London Symphony Orchestra, then Stu Phillips would get the full disposal of the Los Angeles Philharmonic Orchestra.

“TV” music rarely had this kind of impact, and Phillips’ symphonic power was certainly rousing as it blasted through then-small television speakers, and the vinyl of the re-recorded 40 minutes that Phillips culled from this “Saga of the Star World” for an MCA LP. Now those legions who still worship at the altar of O.G. GALACTICA will be blown through the roof to hear Phillips’ complete, original score like never before, its master tapes finally salvaged from the ruins of the colonies (and Universal’s vaults) by Intrada Records. It’s a major sonic revelation of Phillips’ feature-worthy thematic writing that firmly silences critics who viewed GALACTICA’s music as a STAR WARS also-ran back in 1978.

Sure Gene Roddenberry described his show as “WAGON TRAIN to the stars,” but no TV sci-fi motiff so memorably encapsulated a gigantic spaceship’s chugging march to adventure like Phillips’ noble GALACTICA theme, an almost prerequisite approach with BONANZA’s Lorne Green at the helm. And that’s just the tip of the rich, melodic tapestry that served as GALACTICA’s musical bible over the original show’s only season.

Like Williams, Phillips was a master of conveying brassy heroism and villainy with instantly memorable melodic shorthand. Yet beyond the swirling space battle music, there’s much new poignancy to be hard as the colonies’ survivors reflect on the show-making Cylon assault, a sense of bravery with the unexplored prairies of the galaxy awaiting them. Lying ahead are icily menacing Cylon electronics, with fun pit stops to the space disco along the way. It all makes for a big dark sky yearning that shows Phillips’ approach as far more of a western in space than what Williams was going for, a striving sci-fi GUNSMOKE as opposed to the Korngold-Wagner clash of Empire and Rebel.

With all respect to the unplugged musical innovation of Bear McCreary for an arguably far superior take on producer Glenn Larson’s material, there’s still no rush like hearing this full-on return to the glory days when TV sci-fi was played for all of its orchestral worth, but never before with the resources that Phillips was afforded. Big screen or small, there are few better exemplars of rousingly traditional writing than the music that launched Phillips into the TV genre stratosphere of BUCK ROGERS and KNIGHT RIDER (and yes, even GALACTICA 1980) than this lush, extravagant score, a space oater whose majestic force is now truly unleashed.