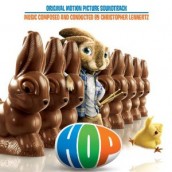 Christopher Lennertz knows how to play with funny animals

Composer Christopher Lennertz could open up a pet store for wiseacre talking animals based on how many of these critters he’s given speedy energy to, but amidst cages filled with chipmunks, dogs, birds and cats, it’s the bunny who’s got the best pedigree.

For in a genre that often turns out to be a dragged-along parents’ equivalent to cleaning up after a hyper puppy, HOP is a pleasingly seditious all-ages delight in every department, its Easter bill paid in style by Lennertz’s rambunctious stylings. His thematic melodies run like a mad dervish through HOP’s double-entendres and slapstick gags instead of stopping at every turn to smell the joke. It’s high energy that’s never less than pleasantly melodic, or better yet, creatively inspired, from its Rapa Nui Easter Island drumming to the funk sound of a movie playing above its perceived age range.

Better yet, Lennertz gives an emotionally wistful, Xmas-like magic to the score’s boundless energy, music that helps HOP rise to its SANTA CLAUSE-like allusions of creating a whole other dimension of non-denominational Christian holiday helpers, bells and happy melodies that would convince any human to chuck it all to become a messenger of good cheer. And HOP has that in spades, from nutty sugar-rush rhythms to the tenderness that makes you want to hug a jellybean-pooping bunny with the voice of Russell Brand, as opposed to turning him into Hasenpfeffer. If they have to keep making these movies, then Lennertz is their one kept man who keeps elevating talking animals up the food chain, especially with such a tasty treat like HOP.