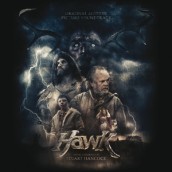 When you hear the lush orchestrations, female choruses singing in some seemingly Elvish language and the dark, foreboding brass that signals ring-obsessed villainy, you might think you’ve somehow time-warped yourself a copy of the score for the forthcoming HOBBIT.

Yet what’s even more astonishing is that HAWK turns out to not only be the score for a Welsh fantasy, but a short film at that. It’s a major stylistic leap up for British composer Stuart Hancock, who last impressed on Movie Score Media with his hard-edged martial arts music for UNDERGROUND and BODYGUARD: A NEW BEGINNING.

Now Hancock enters far more delicate mystical lands previously traveled by Howard Shore, yet conjures a similar feeling of enchantment with his own stylistic voice. It’s a pretty rare feat for a 38-minute project to get the kind of lavish music that conjures volumes-worth of ancient make-believe history, its melodic dimensions impressively depicted by the Bratislava Symphony Orchestra and a choir called Serendipity. If anything, the only regret of HAWK is that there wasn’t more of it for Hancock to score, though the enthralling spoken word legend that sends out the album with “The Legend of Pwyll, Prince of Dyfed” certainly shows HAWK’s RINGS-like sequel possibilities, with a Welsh spin of course.