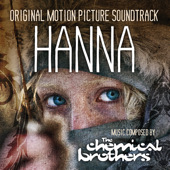 It’s appropriate that a killer kid who represents the feared future of America’s fighting forces also is given a beat by The Chemical Brothers (aka Tom Rowlands and Ed Simons), the industrial-electronica trance band whose pernicious influence on such rock chord n’ computer bleep scores represent all that’s unholy about the future of movie scoring to old-school score fans.

So it’s almost a small wonder that it’s taken the duo this long to do their first true movie score with HANNA, not that much of it truly hits to picture anyway. Yet this wash of beats and atmospheres is completely in cold-blooded synch for this impressive action film that plays like KICK ASS’ Hit Girl as set loose upon the sterile style of the original ANDROMEDA STRAIN.

After the many Chemical-spawned scores that have hypnotized adventurous listeners, their real, rhythmic deal for HANNA has a lethally catchy groove that refuses to let go. If it wasn’t twisted enough to have a playfully whistling main theme (one which its Eurotrash hitman never fails to use), The Chemical Brothers further pound in the devil’s playground metaphors with nursery school bells, all backed with constant, weird science grooves that tells of our anti-heroine’s more-than-fine genetics.

As with their songs, HANNA is all about how to latching onto a cool electro melody and running with it, even if the catchy results seem somewhat caught somewhere between a concept album and an actual film score. Yet the Brothers work never seems out of place in the film’s dispassionate, cruel and exciting world that doesn’t want much to do with traditional soundtrack niceties. The Chemical Brothers nonetheless capture the emotional spirit of film scoring, right down to a truly haunting main theme worthy of its song.

Style hasn’t trumped over substance in their brave new soundtrack world yet, even if HANNA’s mutant music is enough to make any traditionalist very, very afraid.