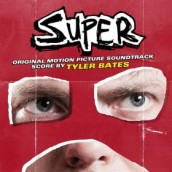 Tyler Bates has proven himself as a master of seditious super hero scoring with the likes of WATCHMEN and EL SUPERBEASTO, upending the sound of muscle men with batshit rock and roll and power-pondering strings. But it’s doubtful if he’ll get quite a screwed-up heroic wannabe as the righteous grill cook of SUPER, his new, enjoyable affront to good musical taste with writer-director James Gunn after scoring that filmmaker’s mass of protoplasm for SLITHER.

Bates’ deliberately grungy approach is caught somewhere between making fun of the twisted sight of a tights-wearing Rainn Wilson and teaming up with him. Garage synths mingle with a majestic chorus as Wilson’s character is brain probed by the awesome finger of God, twisted religiosity that also convinces him to go on a crime-busting crusade with the beatific sound of TV’s Holy Avenger. As things get significantly bloodier and a lot more serious, Bates unleashes the powerhouse rock sound of today’s homemade avengers before settling back down for folksy reconciliation with reality.

Much of SUPER’s low-rent ambience is populated by an effective, eclectic mix of indie and 70’s retro-rock songs from the likes of Eric Carmen, the Lo-def Dollz, Moneybrother and The Nomads (along with the real deal of Cheap Trick). But perhaps the catchiest tune to come out of SUPER is Bates’ own “Two Perfect Moments,” a song whose cheerful la-la’ing captures the lovestruck drive of a seeming schmuck who ultimately proves his worth through Bates’ righteous fury.