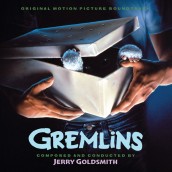 If you were among the generation that saw one great genre film after the other in the early ’80’s, perhaps no signature theme signaled these pictures’ often seditious spin on kid-friendly formulas than the sweet whistling of Gizmo and the cackling, rambunctious jazz rag of what would pop out of that furry little fella if you fed him after midnight. It’s taken nearly three decades for those little devils’ music to fully metamorphose, but at long last, Jerry Goldsmith’s full score to GREMLINS is finally here to create hilariously menacing havoc.

While Goldsmith was famed for scoring the far more visceral horrors of THE OMEN and ALIEN, it took Joe Dante to really bring out the big, goofy geek in the seriously esteemed composer. “Gremlins” combined Goldsmith’s comforting touch for lush orchestral melody with outright synth absurdity and the malefic use the fiddle- a nutty formula which first served these collaborators well when Goldsmith applied it to Dante’s “It’s A Good Life” segment from the TWILIGHT ZONE movie.

GREMLINS took that mix to even more twisted extremes for this musical battle royale between Christmas-style warmth and holly-jolly evil. Given synth raspberries and the cries of cats in heat, as stroked to destructive frenzy by Old Scratch’s favorite instrument, Stripe and his gang rampage through the hearth and home of Kingston Falls to the composer’s brilliant brand of string suspense and staccato action. It’s a satirical blend of the musical sweet and sour that Goldsmith relishes like no other score, with some of the best material on this unleashed GREMLINS heard in its climactic department store chase.

Pitting the swashbuckling heroism of the toy-car driving Gizmo against the fearsome brass menace and synth mewls of a chainsaw-wielding Stripe, GREMLINS music turns the battle between two cleverly used puppets into a suspenseful race to save the world, as filtered through the sensibility of Bugs Bunny on a particularly nasty prank day.

For fans, it’ll be all about dancing to the Gremlin Rag, easily Goldsmith’s most infectious main theme. But I’ve always been partial to Michael Sembello’s “Gremlins… Mega Madness,” the disco-pop song that accompanied the film’s brilliant shark-jumping dance scene. This tune that was part of GREMLINS original mini-EP (along with such other ’80’s soundtrack stalwarts as Quarterflash and Peter Gabriel) makes up the second CD on this terrific release, with the first disc’s bonus section offering such gems as the ultra-cool bar “Blues” piece, a creepy “Silent Night” to accompany the film’s anti-Xmas spirit, and the film’s height of Looney Tune brilliance with an excerpt of Milt Franklyn’s “Rabbit Rampage.”

Thanks to Film Score Monthly, the rules no longer apply as the label goes out with a bang for Goldsmith’s brilliantly goofy grail to rule them all.