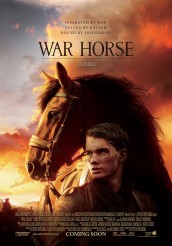 Thematically, temporally and emotionally, if BLACK BEAUTY and SAVING PRIVATE RYAN had a cinematic offspring, it probably would be WAR HORSE. Using the Michael Morpurgo novel that also inspired the current Broadway hit of the same name, WAR HORSE is the story of Joey, a horse with a lot of heart and ability, and Albert Narracott (Jeremy Irvine), the boy who trains him and loves him. Albert’s alcoholic father Ted (Peter Mullan) buys Joey as a plow animal, even though the horse is clearly bred for riding. However, Albert is able to teach Joey how to plow in incredibly trying circumstances – only to have Ted sell Joey to the British army when WWI breaks out. When Albert can’t buy Joey back, he tries to join up, but he’s too young.

We follow Joey as he changes hands, many times, often in harrowing, bloody conditions. Albert rejoins the story when he’s old enough to enter the army. The saga takes us into the trenches, the mud-soaked battlefields and the barbed-wire-stitched purgatory of no man’s land, with corpses of humans and equines alike darkening the landscape. WAR HORSE respects its PG-13 rating – we see no spurting blood or gaping wounds – but it makes the point frequently that there is nothing glorious about any of this, except for the bravery it brings out in all of those trapped in the situation.

The screenplay by Lee Hall and Richard Curtis is commendable in that it doesn’t require Joey to be more than a horse; the animal has a great survival instinct, good luck at crucial moments and natural charisma (even though Joey is actually played by 24 separate animals), but there’s nothing non-equine about his actions.  This in turn gives the story added credibility, which it needs, due to the amount of coincidence packed into certain crucial events. The dialogue isn’t precisely on the nose, but none of the sentiments expressed are likely to surprise us, with the exception of a sequence where basic humanity triumphs over nationalistic enmity.

There are a number of archetypal characters here, but if you’ve got to have someone playing a self-loathing alcoholic, Peter Mullan does it masterfully, and with Emily Watson as his salt of the earth sensible wife, both the couple and their relationship with one another have dimension added by the actors.Irvine is appealing in Albert’s earnestness and determination. Others in the fine cast include Benedict Cumberbatch, Tom Hiddleston, Niels Arestrup, Celine Buckens, David Thewlis and Eddie Marsan.

Cinematographer Janusz Kaminski crafts a series of stunning images, from beautiful English country fields to break gray battlefields to painterly Western sunsets. John Williams’ score overdoes it a bit and sometimes (doubtless unintentionally) seems as though it is about to break into the original STAR TREK theme by repeating its first three notes.