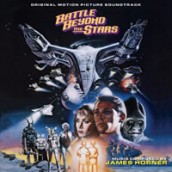 Roger Corman has given breaks to such future Hollywood superstars as Martin Scorcese, Jack Nicholson and Jonathan Demme under the most pitiable budgetary circumstances.  What distinguished James Horner’s big musical break on 1980’s BATTLE BEYOND THE STARS is that it was Corman’s biggest budgeted-film yet, making it quite the step up for a 27 year old who’d impressed New World with his scores for UP FROM THE DEPTHS, THE LADY IN RED and HUMANOIDS FROM THE DEEP.

Finally given a STAR WARS rip-off instead of some JAWS-inspired aquatic monster, Horner mightily rose to the challenge with this terrifically thrilling soundtrack, and film that’s still one of Corman’s best. While Horner might not have had the music budget the Lucas afforded to Williams, the composer poured everything he had to rise this SEVEN SAMURAI-in-space spin to a level worthy of Luke Skywalker, filling his score with the same passion for swashbuckling leitmotifs.

Horner also gives a tip of the cowboy hat to Elmer Bernstein’s score for the SAMURAI-inspired MAGNIFICENT SEVEN while indulging in that sadly missed synth instrument The Blaster Beam. The Prokofiev-inspired classical antecedents and accomplished symphonic writing that would inform Horner’s musical vocabulary are also thoroughly evident in BATTLE, which serves as a wellspring for the stuff of angry Klingons, swooning romance and charging percussion that would result in such other Horner masterworks as STAR TREK’s 2 and 3, KRULL and TITANIC, let alone AVATAR (whose director also served on Corman’s breasty spaceship here). More than a calling card that would quickly get Horner snapped up by Hollywood, BATTLE BEYOND THE STARS still stands as one of this Young Turk’s most enjoyable old-fashioned scores.

While this newest edition of BATTLE might not contain its last GNP release’s addition of HUMANOIDS, the Buysoundtrax album does feature a fun Alan Howarth jukebox bit for the chamber of MAGNIFICENT SEVEN star Robert Vaughan’s ornery space assassin, followed by 25 minutes of Howarth’s sound effects- bleeps, laser blasts and spaceship engines that quickly became familiar to anyone who watched the two zillion Corman flicks that seemingly utilized footage, and music from BATTLE, with good reason.

Click on link: To buy the BATTLE BEYOND THE STARS soundtrack