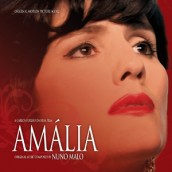 In Portuguese, the musical form of “Fado” is translated as “fate.” And while soundtrack fans might not be familiar with its mournful tunes, or the acclaimed performer who evolved them for the 20th century, they’ll likely feel for Amalia Rodriguez’s artistically turbulent life upon listening to this lush orchestral score by her countryman Nuno Malo.

With his passionate approach for AMALIA and JULGAMENTO (also released by Movie Score Media), Malo is rapidly bringing the technical polish of Portugal’s film scoring scene to the international ear. Perhaps it’s because Amalia herself broadened Fado with an orchestral that Malo concentrates more on lush string turbulence than acoustical sets here, his tragically beautiful symphony conveying the song-possessed sadness that nearly sends Amalia over the edge, an angst that’s joined by tender pianos and ghostly voices.

Yet Malo is sure to allow for plaintive guitars, a cello lament and samba rhythms to give Amalia her national identity, with a tune by the singer herself ending the album. AMALIA is certainly as grandly emotional as any American biopic score, but with the kind of soaring feeling which composers across the Atlantic seem to have less problem diving into. Amalia, or Portugal, couldn’t hope to have a better calling card than this introduction to Fado’s feeling, if not exactly it’s form.