Home » Blu-ray Review: I SPIT ON YOUR GRAVE 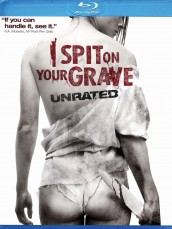 The remake to the 1978 cult classic is more of the same, and surprisingly, not as shocking

I get a little sick of all the lame remakes or reimagining or whatever you call them because they are either a straight remake of the original or they screw it up entirely ruining any legacy the film may have had. The original 1978 I SPIT ON YOUR GRAVE was a marvel of shock, Grindhouse style and quite frankly like nothing else that had been seen where an innocent woman is abused, raped and left for dead. She takes her revenge on those did the dastardly deeds in the most macabre ways possible.

The same thing happens in the remake, but with Sarah Butler starring in the lead role as the shamed woman.

While the special effects, cinematography and high resolution picture all make for a better viewing experience, there is just something missing – something that the original captured that this doesn’t. Maybe because we are no longer shocked after so many torture films awitnd endless amounts of brutal horror. Or that rape, while isn’t a common theme, has been done much more brutal – who could ever forget the scene from IRREVERSIBLE.

That isn’t to say it is ever right and the scene or scenes here is extremely brutal. It just lacks passion and you rarely feel anything for the heroine. The unrated version contains scenes not included in the limited theatrical release along with making ofs and all kinds of other good special features.

Meanwhile, the original I SPIT ON YOUR GRAVE aka THE DAY OF THE WOMAN is also being offered this week for the first time on Blu-ray and it really does show why this is the superior version despite having far less pleasing visuals and cinematography. Gritty and brutal, unlike the remake you actually care about the plight of this woman and enjoy watching her do unto others as they did unto her.