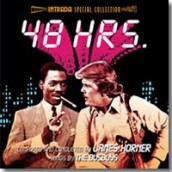 While James Horner showed he could go where no Enterprise scorer had gone before with his breakthrough, nautical-styled space adventure for 1982’s STAR TREK II, it would be that year’s 48 HRS. which truly showed him off as being far from a one-note composer. If audiences hadn’t seen this kind of hilariously foul-mouthed, squib-filled “buddy cop” movie before, then they certainly hadn’t heard the vibrant, ethnic spin that Horner put on the genre – a ferociously energetic approach that made KHAN’s musical wrath sound positively sedate by comparison.

Horner likely keyed off of the manic urban energy that filled Eddie Murphy’s star-making performance, an inner city ‘tude that would be represented by Caribbean-style kettle drums and a wailing sax, its percussion conjuring the funky mean streets of San Francisco. Horner’s wisest choice would be leaving the humor to Murphy and Nick Nolte’s convict and cop fisticuffs, infusing his score with a true sense of danger that would ratchet up the suspenseful stakes, with a wall of sound backed by synths and orchestra. It’s a near-uncontrollable energy packing the true improv nature of movie jazz, minus any of its film noir niceties.

48 HRS. pioneered an urban groove that Horner would continue to expand upon for Arnie in COMMANDO and RED HEAT, not to mention ANOTHER 48 HRS., whose similar music was just about the only thing that didn’t play to diminished returns.

Intrada fills in a major slot in Horner’s early discography, with a sound that packs a fresher punch than ever. Better yet, The BusBoy’s “The Boys Are Back in Town” is finally here to rock the house. It shows off song supervisor Ira Newborn as the good cop in 48 HRS. prowl of informant-filled dive bars and juke houses, joints blasting with the honkytonk, blues, jazz swing and red-hot country fiddling for “48 Hours,” “New Shoes” and “Torchy’s Boogie” – all of which make this an album that will appeal as much to Horner fans as retro song collectors.