Home » Breaking News: CBS Exec talk about the return of TWO AND A HALF MEN with Ashton Kutcher 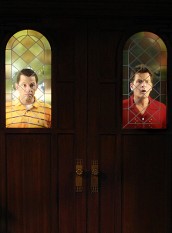 ©2010 Warner Bros. Television
Jon Cryer and Charlie Sheen in TWO AND A HALF MEN - Season 8 - "The Crazy Bitch Gazette"
News

Breaking News: CBS Exec talk about the return of TWO AND A HALF MEN with Ashton Kutcher

Charlie Sheen is out, but the CBS series goes on

While speaking to the press today at today’s pre-Upfront gathering, CBS President Nina Tassler spoke about the recent shake-up with TWO AND A HALF MEN and what it means with Ashton Kutcher joining the show.

“We’re very excited because for us, we’re a forward thinking company and we’re looking ahead and excited about the creative,” says Tassler. “[Creator] Chuck Lorre is over the moon. Let’s remember, we have an award winning cast and we have an extraordinary ensemble who are at the peak of their game. It’s a great movie forward. [Ashton] is a great addition to the cast. We’re thrilled to have him and I think it brings Mondays back to form.”

As whether or not Charlie Harper’s character will be killed off to make way for Ashton, Tassler says the plan for integrating him into the show has been carefully plotted out.

“We know they have a master plan for the character,” says Tassler. “With respect with Chuck and the show, all that will be revealed at a later date. Everybody will see it in the fall.”