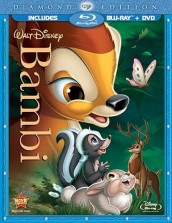 As modern day children’s films continually shoot for bigger, better and eye-strain inducing 3D, there’s something to be said for simplicity.

BAMBI, the fifth full length animated film from Walt Disney Studios and originally released in 1942, has stood the test of time with its beautiful hand-drawn animation and the elegant beauty in creating a forest and woodland creatures that still resonate today.

I’m not arguing that artistry doesn’t go into CGI animated features or even the occasional hand-drawn animated film that slips through the cracks -–but with Walt Disney (the man, not the company), he was pioneering the art form and creating great art in the process.

At a little less than an hour and ten minutes, BAMBI follows the titular young fawn from his birth to his growth into a responsible adult deer. We all know the tragedy that befalls Bambi (his mom is shot by hunters), which is something that still brings a sense of dread all these years later. But in some ways, seeing this film as a kid is a right of passage – bringing the grim reminder that we’re all mortal and that nothing lasts forever.

BAMBI is also populated by some of Disney’s most enduring characters including rabbit Thumper, skunk Flower and the wise old Owl.

Each time I watch BAMBI I discover something new. It’s such a richly drawn and well-thought out feature and its excellence is enhanced by its timelessness. Kids of all ages, generations after generations can be still be in awe of its greatness.

This DIAMOND EDITION of the film is packaged as a Blu-ray/DVD combo and this marks the first time the film has been available in the Blu-ray format.

This is by far one of the best transfers of the film to date. I still don’t know how they can top this, but that’s what I said the last time the film was released and remastered on DVD.

There are many holdover featurettes from the DVD, but it’s the new Blu-ray features that are really cool.

There’s INSIDE WALT’S STORY MEETINGS which has been enhanced with the Blu-ray capabilities and pits you directly inside the specific meetings with Walt, his writers and animators during the evolution of BAMBI. Disney was very adamant about transcribing all creative sessions and they’re all archived by Disney. New actors voice the transcripts augmented by various visuals. This is super cool – and it shows how smart and savvy these artisans were.

There are also two previously unseen deleted scenes. Both are in rough storyboard form, and one of them would make a great short – about two remaining leaves on a tree talking to each other and worried about what happens when one of them falls off the tree. It’s quite touching and there is a silent remnant of this in the completed feature film.

There was also a song created for the film, but never used, called “Twitterpated” and you get to hear it here for the first time.

There’s also a new function on the Blu-ray called “Disney’s Second Screen” that links your Blu-ray player to an iPad or computer where you can get additional information and fun stuff to do as the movie is playing. It’s perfect for the technologically addicted ADD generation. A DVD is also included in the package as well.

As with many Disney re-releases, there’s the DISNEY’S BIG BOOK OF KNOWLEDGE game which gives educational lessons about the forest, while also providing quizzes and games for kids to do as well. Thank goodness for Blu-ray, since it allows more interactivity than DVD could ever provide.

Every five years or so, Disney re-releases their classic films and still manages to find something new to include for die-hard fans and collectors. BAMBI is no exception, and yes, it is worth owning yet another incarnation of the film. When it’s as good as this, it sure beats plucking down $40.00 at the movie theater to see YOGI BEAR in 3D.

Exclusive Photos: From the Los Angeles Premiere of THE TEMPEST
Interview: Timothy Olyphant is JUSTIFIED on his FX series
TV Review: THE VAMPIRE DIARIES - Season 3 - “The End of the Affair”
RIVERDALE: Mädchen Amick on the new ARCHIE series - Exclusive Intervie...