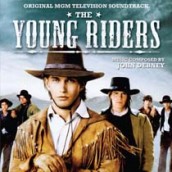 Whether it’s ROAR or THE CAPE, television has unabashedly turned every big screen hit from BRAVEHEART to BATMAN into show’s whose themes were just discernable enough to avoid legal outrage. Such was the case of this YOUNG GUNS-esque adventure that ran from 1989 to 1992.

The concept here was to turn teen outlaws into equally hot Pony Express riders, whose saddles would be filled by the likes of Stephen Baldwin and Josh Brolin. Another growing talent would be John Debney, who was sowing his musical oats on such movie spin-off shows as FAME and POLICE ACADEMY before taking on RIDERS with gusto.

Though there’s a definite feel of Anthony Marinelli’s hip, anachronistic approach for YOUNG GUNS in RIDER’s rocking guitar action and synths, Debney would also get to show off the orchestral action chops that would lead to the bigscreen likes of CUTTHROAT ISLAND and SUDDEN DEATH.

Drawing from the Americana string, trumpet and harmonica well that Bruce Broughton had invigorated the film western with in SILVERADO and TOMBSTONE, Debney achieved a scope as big outdoors for the small screen, with the kind of themework that’s made RIDERS’ music stick around long in enough in fans’ memories to now get this thoroughly enjoyable CD compilation.

With highlights including both the expected guitar chords as well as such unique touches as Negro spirituals for an episode that would win him an Emmy, YOUNG RIDERS ends up being a tribute to the kind of old foggie western music that was around on TV long before any whispersnaper thought to pick up a rock guitar.