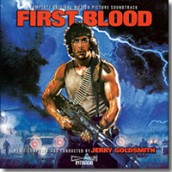 Intrada gets the first, and last word for Jerry Goldsmith's classic score

This might not be the first time that Jerry Goldsmith’s inimitable action score has been released, but it likely won’t get better than Intrada’s “ultimate” edition, whose two CD’s feature FIRST BLOOD’s original cues and composer-sequenced soundtrack album.

While Goldsmith would grow with Rambo’s transformation into a muscle-packed fighting machine, perhaps none of the composers’ three scores for the series packed the vulnerability, and even dare say tenderness, of a character that started off as a killable human being. It doesn’t take long for this mournful trumpet and guitar compassion to give way to Goldsmith’s way with the gracefully pounding rhythms that distinguish his best action scores, as electronic percussion combines with piano-topped orchestral adrenalin for a score that’s more about brutal wilderness adventure than it is war.

That music surely enough comes to the small Northwestern town for my favorite cue “No Power / Night Attack,” in which Goldsmith’s ever-escalating orchestra and military percussion tensely build before unleashing hell. FIRST BLOOD more than ever comes across as the kind of theme-driven action score they don’t make anymore, especially the type that’s topped off with a memorable, theme-based ballad like Dan Hill’s “It’s A Long Road.”

As added bonuses, Intrada’s release of the title that’s led to its 25th anniversary features a “Road” demo, the original advance trailer music to 1984’s RAMBO and Goldsmith’s BLOOD-based music for the Carolco Logo, its imperious motiff promised a glorious body count to a generation of Stallone fans. There’s certainly a lot of love as displayed in the liner notes by Intrada head Douglass Fake, who engagingly details his company’s origins, as well as the gleefully grueling process that it took to painstakingly assemble what will likely be the last note on Goldsmith’s origins with John Rambo.