Home » Exclusive Interview: Shane West is after the femme of NIKITA 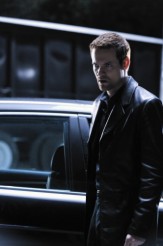 Exclusive Interview: Shane West is after the femme of NIKITA 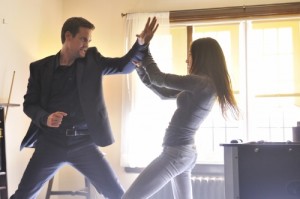 If the title of the CW’s NIKITA, airing Thursdays at 9 PM, sounds a bit familiar, that’s because it started life as the 1990 French feature film LA FEMME NIKITA, which was remade in English as the 1993 POINT OF NO RETURN, then turned into a TV series that ran from 1997-2001.

The series concerned a young woman coerced into being a ferociously effective assassin for a mysterious group. The new NIKITA is a sequel of sorts, with Nikita, played by Maggie Q, having forcefully parted ways with her erstwhile employers and now seeking to bring their entire operation down. She has enlisted the aid of Alex (Lyndsy Fonseca), a young recruit who is in many respects going through what Nikita went through.

Nikita has a volatile relationship with her former handler Michael, played by Shane West. West spent three years as doctor Ray Barrett on ER, played Eli Sammler on ONCE AND AGAIN and was Tom Sawyer in THE LEAGUE OF EXTRAORDINARY GENTLEMEN. He sounds happy about being in the TV spy game.

ASSIGNMENT X: Did you particularly want to do an action show at this time, or did this just come along?

SHANE WEST: It wasn’t something that I was actively looking for. I’ve done some films, but this having experience on television before, I knew that you could create a character better on a show. You have more time – you have years to be able to do that. And being able to have the opportunity to play this character, and being a big fan of the original film, and being able to get a fresh take on it, I couldn’t turn it down.

AX: In both the original LA FEMME NIKITA and the English-language remake feature films, the Michael/mentor character was substantially older than Nikita, whereas you appear about the same age as Maggie Q. Does having both those characters be about the same age change the dynamic at all?

WEST: I think it makes it a little bit more intriguing and a little less creepy, to be honest. Especially when you watch – there is a little bit of flirtation, something that could potentially be there. I really think they wanted to do this not just because it might have been for a younger audience, which I’m sure was one of the reasons, but also because you can possibly believe that these two characters may have had a history, may have had a past, may have a future. So we want to keep that alive. 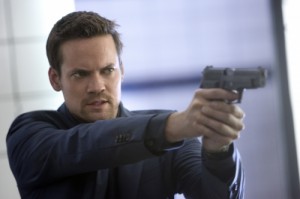 WEST: That’s a hard question to answer. [The writers have] given us something to go from, as an actor usually does need to know before getting into a project, so they gave us some information. [How much will be revealed this season] we don’t know yet, but it’s pretty confusing for Michael. He’s had a lot of rough things go on in his life. That’s about all I can say right now, because I wouldn’t want to spoil it, but if they write what I know, it’s going to be very entertaining that’s for sure.

AX: Michael is a very physical role. How does playing him stack up against some of the other action characters you’ve played?

WEST: When I did LEAGUE OF EXTRAORDINARY GENTLEMEN, that was very physical. Most of that work, which was six months in Prague, memorizing dialogue, happened once every two weeks [in terms of when action sequences were filmed]. This is much different. I just did a huge action sequence. I learned it the night before and then had to spend the rest of the day doing it, because it’s that quick. On LEAGUE, we had weeks, months, to learn these things. This is a lot more fast-paced, but once again, with [executive producer/director] Danny [Cannon] and everyone that’s been involved, they keep the quality up.

AX: Did you do any training for the role?

WEST: Yes, I actually have had a lot of that, with [past projects]. I did a film called ECHELON CONSPIRACY, where I had a little bit of gun training in that, too. My character wasn’t supposed to know how, but I did brandish a weapon often. In the [NIKITA] pilot, I don’t do anything. It was one of those funny things where I showed up for work and to go through gun training, and I never fired a gun in the pilot. So we take it episode by episode. I’ve had some accidental gun training over the past six years [laughs]. 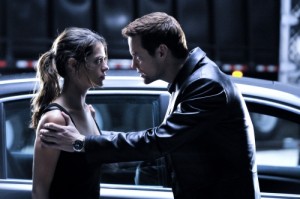 AX: Do you have a preference between television and  film?

WEST: I don’t know if there’s really a preference. It’s very exciting both ways. I just think sometimes it’s a little easier with film because you have more time, but thankfully, this project, they’ve gathered such a great team that’s done this many times that the quality of work and the quality of film hasn’t changed and it looks like a film.

AX: You have a tattoo on your shoulder that is reportedly related to a film you did …

WEST: I got it for WHAT WE DO IS SECRET, which was based on a punk rock legend, Darby Crash [played by West in the film]. He had the same tattoo, and I got that to honor him and his band [the Germs], which I also sing for now, getting to know his family, getting to know his friends, and all the hell we went through trying to make that movie, which was the entire time I was on ER. My three years on ER, it was the only [film] project I did, just trying to get that thing off the ground. So that’s probably the one that means the most to me. It’s a panther with a circle around him. One of the lines of the song [written by Crash] was that he came into this world as a panther, and always being confused, and everything goes in circles.

AX: What else should we know about NIKITA?