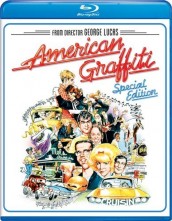 George Lucas’s other classic film that superbly embraces a time from a long time ago, in a small town far, far away

Most people know George Lucas as the creator of the billion dollar empire known as STAR WARS, but the generation of kids who grew up on the prequel trilogy have no idea that Lucas actually created a completely different film set in a different time period, far, far away.

1973’s AMERICAN GRAFFITI was co-writer (with Gloria Katz & Willard Huyck) and director Lucas’s love letter to 1960’s small town car culture in Northern California where he grew up. Although Universal Pictures didn’t know what to make of the film at first, it proved to be a huge success and paved the way for Lucas’ 1977 follow-up STAR WARS.

AMERICAN GRAFFITI links a whole bunch of different stories revolving around a group of friends on the night of many of them leaving town and heading off to college. Steve (Ron Howard, then known as Ronny Howard) wants to spend one last night with his girlfriend Laurie (Cindy Williams) who is staying behind, but blows everything when he suggests they should see other people while he’s away. Curt (Richard Dreyfuss) is reconsidering going to college, thinking it’s not for him and starts to re-evaluate his own ideals and goals before the night is through.

Then there’s hot rodder John (Paul Le Mat) who ends up befriending an underage spitfire named Carol (Mackenzie Phillips) who proves to be more fun than he expected. He’s also being pursued by a mysterious hot rodder named Bob Falfa (Harrison Ford) who is looking to race him.

Rounding out the stories is geeky Terry (Charles Martin Smith) who is given the keys to Steve’s car to take care of and picks up Debbie (Candy Clark) for the night who shows him a thing or two about having fun.

Serving as a backdrop to all of this are classic songs from the 1950s and 1960s with the voice of DJ Wolfman Jack popping up throughout and adding to the film’s nostalgic feel.

AMERICAN GRAFFITI is all about tone and mood – story is actually secondary. It’s a bunch of memories and vignettes that make up a very heartfelt and enjoyable film. It’s not nearly as complex as the STAR WARS franchise, but there’s definitely many echoes (both in story and structure) of what would follow with his signature franchise.

I’ve never been a big fan of the previous DVD releases of GRAFFITI, because I never felt the picture looked as good as it should. Lucas has remedied that with a brand-new digitally remastered picture and the film has never looked better. The grain and washed out look has been replaced by a crystal clear image. Since it was supervised by Lucas himself, you know it had to be perfect.

The special features on Blu-ray are also pretty cool. Lucas gives a picture-in-picture video commentary that pops up throughout the movie using Universal “U-control” Blu-ray feature. U-control also has a juke-box function that identifies the songs playing in the background with the name of the artist (it’s even designed to look like those little jukebox tabs). The function even allows you to purchase the songs from iTunes if you like them enough.

Making their return visit from the DVD edition are archival featurettes “The Making of American Graffiti” that outlines the inception of the picture and “Screen Tests” of all the actors from the film before they were cast.

AMERICAN GRAFFITI definitely showed off Lucas’s early promise as a filmmaker and almost makes you wish he would have directed more films in his career once he was done with the STAR WARS saga. He is a fine filmmaker, even if he did let technology overtake his sensibilities in the later years. The restraint and knack for capturing small moments is something he lost when he directed the STAR WARS prequel trilogy, and somewhere in that mega-billionaire soul of his, he still has a few more small, indie-like AMERICAN GRAFFITI’s lurking about.

Maybe getting a chance to revisit this film, will inspire him to try another movie like this. Certainly he could afford to fund it himself. In the meantime, if you’re a fan of Lucas, this movie is worth owning in this pristine new Blu-ray edition. Not only do you get to see a literal who’s who of actors who went on to much bigger things, but you also one of the finest coming-of-age films ever made.

Click on the link: For AX’s EAT MY DUST/GRAND THEFT AUTO DVD review