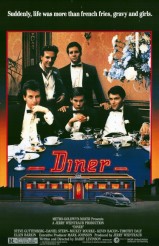 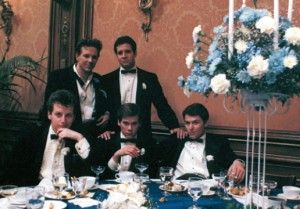 One of the most underrated 1980s comedies is DINER, the writer-directorial debut of Barry Levinson and tonight LACMA is sponsoring a special screening in Los Angeles tonight, December 1, at 7:30. You can purchase DINER tickets by clicking on the link.

Rarely is there such a perfect first film, but Levinson nailed it with his 1982 classic set in 1959 Baltimore. Based on his own experiences, DINER stars Kevin Bacon, Timothy Daly, Mickey Rourke, Steve Guttenberg, Ellen Barkin, Paul Reiser and Daniel Stern in their first breakout roles.

The film is essentially about a bunch of guys trying to grow up, but still behaving like kids. It’s the anti-thesis of the PORKY’S sex comedies  which were the rage at the time.

It’s adult, funny, real and features a naturalistic quality that sets DINER apart from almost every film you could potentially compare it to.

This one of those films that begs to be seen on the big screen. And if you’ve already seen it before, the details and nuances hold up with each repeated viewing. There’s an innate sadness to the film that truly gives it an edge – plus the 1950s soundtrack is chock full of familiar and obscure gems.

The screening tonight will also feature a discussion with filmmakers Gavin O’Connor (director of WARRIOR and MIRACLE) and Paul Feig (director of BRIDESMAIDS).