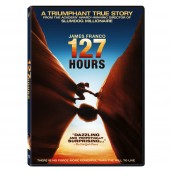 127 HOURS – Regardless of what you thought about James Franco’s either aloof or disinterested or high character he played during the Oscars on Sunday night, there’s no denying the man can act – whether it’s on GENERAL HOSPITAL or in this Oscar-nominated film based on true events. As with other survival movies that pit real people in real unbelievable situations you always find yourself questioning just what you would do in a similar situation. Here, Franco’s character finds his arm (and thus himself) trapped by a huge boulder after a rock climbing accident. Ultimately it is a choice whether to live or die and, in reality, for most of us the answer to the question is life. 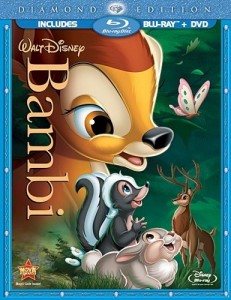 BAMBI – TWO DISC DIAMOND EDITION Blu-ray/DVD Combo – The Disney classic is back on video and for the first time offered in high-definition Blu-ray. The animated adventure has been augmented with Disney’s enhanced high definition picture and sound. Additionally, there are a host of new special features that are included here such as a new introduction by Diane Disney Miller, two never before seen deleted scenes, a deleted song, Blu-ray photo galleries, a new game on the knowledge of Disney and an interactive featurette on the “Inside Walt’s Story Meetings.” Very cool stuff indeed.

BURLESQUE – Similar to other musicals about dancers that have come before it – such as CABARET and MOULIN ROUGE – BURLESQUE has a near identical plotline to SHOWGIRLS with a small town girl (this time Christina Aguilera) trying to make it big on stage. Unfortunately, this doesn’t have the nudity or sex scenes that the new wave classic SHOWGIRLS has but instead tries it’s best to be more corny than sleazy. While some called it corny, it isn’t but it definitely has a weird feeling of trying hard to be just ridiculous. Meh, it kinda works but I’d still like more nudity. More nudity? Any nudity. I know, I’m shameless, I admit it.

LOVE AND OTHER DRUGS – Hot damn, Anne Hathaway is hot as balls.  It is too bad she is in this yet another formulaic rom-com (romantic-comedy) with a freaking twist that doesn’t amount to a hill of beans in the long run. Yes, it is fine acted. Yes, the production values are through the roof and it looks amazing. Yes, Hathaway is naked a lot in the movie (which is definitely a reason to check it out if you are a guy and need to impress on a date night). However, it brings nothing interesting other than boy-meets-girl-they fall in love-they fall out of love-there is a twist-roll the credits. I know these films make buckets of money, but damn, I just want one out of the mold once and a while.

FASTER – As long as these movies are fun, I don’t mind Hollywood making 13 or however many they plan to make. They should maybe just keep with the same movie title because it is all getting confusing. THE FAST & THE FURIOUS: 13 – RETIREMENT HOME DRAGSTERS or whatever. All these FAST, 2 FAST 2 FURIOUS, FAST & FURIOUS … just gets all confusing. Anyway, this stars Dwayne “The Rock” Johnson, who recently has returned back to his roots in pro wrestling, as the newest outlaw racer in illegal street racing. Again, it’s fun, you won’t expect much so you won’t get much but still it will be a good ride. 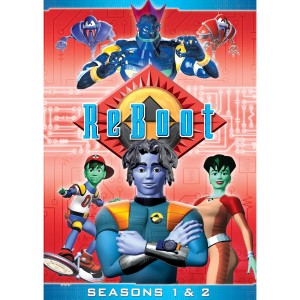 REBOOT – SEASONS ONE AND TWO: THE DEFINITIVE MAINFRAME EDITION – Billed as the first fully computer-generated animated TV series when it debut in 1994 and began what today is a huge market for CGI animated toons from blockbuster films such as TOY STORY to new children TV series such as BUBBLE GUPPIES and TEAM UMIZOOMI. But the list has just kept growing over the past 16-plus years. Now, the series is available for the first time in a four-disc set with all 23 episodes from the first and second season. The Definitive Mainframe edition includes 18 hours of additional content including a 24-page collectible book and a limited edition collector’s card. Very cool stuff.

MURDER INVESTIGATION TEAM – SERIES 1 – Acorn Media keeps churning out the good stuff from the U.K. as this gritty police drama makes its debut in the U.S. Starring Samantha Sprio, Lindsey Coulson, Richard Hope, Michael McKell and Richard Huw this show is nearly a CSI of the U.K. but with much sexier accents.

LEAVE IT TO BEAVER – SEASON SIX – The classic comes to DVD for the sixth time.