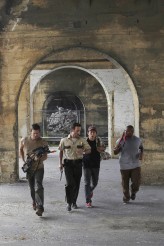 With two new vehicles and one less racist, the team that braved the zombie-clogged Atlanta streets returns to the survivors’ camp in the powerful third episode of THE WALKING DEAD, “Tell It To The Frogs.”

The most significant development is Rick’s (Andrew Lincoln) long-awaited reunion with wife Lori (Sarah Wayne Callies),  son Carl (Chandler Riggs), and best friend Shane (Jon Bernthal). That’s Shane, the man that replaced Rick as Carl’s father figure and Lori’s lover in addition to ruling over the fearful fiefdom that serves as our microcosm of human society. Now that Rick is back, what will happen to the fragile balance of Shane’s tribe? And how will Daryl Dixon deal with the loss of his brother Merle (Michael Rooker), who may still be alive on that sweltering hot rooftop, handcuffed and left for dead? 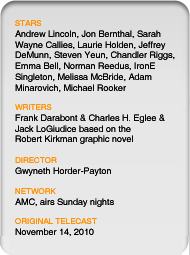 It was bound to happen even in this short six-episode run, but for the third episode the zombies take a back seat to the human drama driven by their existence. Most of the episode focuses on the changing dynamic in the group caused by Rick’s arrival, as well as another aspect of the all-too-real ugliness within us rising to the surface (more on that later).

Carl makes a pleasantly meta observation when Lori admits to being worried about Rick’s trip. As the boy points out, with everything his father has been through, nothing has killed him yet. Of course not – he’s our hero!

Other highlights include the emergence of the always-reliable Jeffrey DeMunn. Barely glimpsed until now, DeMunn’s amiable but cagey Dale demonstrates that in the post-apocalypse, bartering is often the best way to maintain a balance of resources and cooperation.

Something you often see left out of other zombie stories is the stench these creatures must carry with them, but here we see the group react visibly (again) to the smell when faced with a deer-munching “geek.” Another nice touch is the teamwork when Shane and Rick handle Daryl’s predictable outburst upon hearing the news about his brother. Could these two still work together, especially if and when everything comes out in the open? The shot of Shane standing (well, sitting) watch on the trailer’s roof with thunder and lightning behind him could not be more pointed – not to mention Shakespearean – if it tried. With Rick and Lori rediscovering each other in a nearby tent, Shane is now most assuredly out in the rain, and a storm is gathering. That anger and frustration has to go somewhere…and most of it comes out before this episode is even over.

Ah yes, the ugliness I mentioned earlier? That would be Ed (Adam Minarovich), husband to downtrodden Carol (Melissa Suzanne McBride) and about as clichéd a wife-beater as Merle was a stereotypical white supremacist. Serious gender issues rear their head when the women in the camp comment on the unfair division of labor. Has the end of modern society doomed us to fall back into primal patterns of behavior, with alpha males and domestic females? And can the girls find the batteries they need to revive old…acquaintances? While laughing about the loss of their marital aids, the women bring out the beast in Ed before Shane steps in to assert his authori-tah.

The final scenes are accompanied by music very reminiscent of the famous slow-building 28 DAYS LATER theme as Shane proves that sometimes violence’s only answer is more violence. We leave our heroes back on that roof as they discover how Merle took a hand in his own escape. Now that’s gotta hurt.