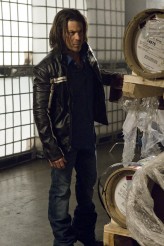 As Season Three of LEVERAGE has had a through-line of Nate (Timothy Hutton) et al being urged/blackmailed by a mysterious Italian (Elisabetta Canalis) to go after the mysterious, extremely powerful international criminal Damian Moreau, it stands to reason that the season finale would bring our team and the villain face to face. Director Marc Roskin and writers Chris Downey & Geoffrey Thorne have crafted an episode that has not only the customary LEVERAGE intrigue and impersonations, but also some surprising (for this show) gunplay and fatalities.

After rescuing a scientist from a Department of Defense lab that promptly blows up, Nate and the team are finally ready to directly take on the responsible party, Moreau (Goran Visnjic), face to face. Moreau is planning to auction off something big, code name Ram’s Horn, which Hardison (Aldis Hodge) figures out is an electronic magnetic pulse bomb big enough to wipe out the power of an entire city. When Hardison and Eliot (Christian Kane) go to see Moreau, posing as intermediaries for a buyer, Hardison is shocked to find that Eliot used to work for Moreau, who still seems to hold the hitter in high esteem. Hardison is also not thrilled that Eliot doesn’t try to save him when Moreau tosses the computer expert, at the time handcuffed to a chair, into a swimming pool, requiring Hardison to uncuff himself.

Moreau says he’s willing to meet with Eliot and Hardison’s employer, provided that Eliot does him a little favor first – Eliot is to kill Moreau’s associate, a U.S. general. The team convincingly fakes the assassination. Hardison and Parker (Beth Riesgraf) are deployed to destroy the bomb, which is aboard a train, while Eliot and Nate show up for an auction that turns out to be an ambush.

Eliot, with no choice, whips out two guns and takes out Moreau’s army of assassins. As Moreau prepares to board a plane, Nate informs the surprised baddie that, since Nate can’t prove Moreau’s actual crimes, he’s been framed for a lot of other dirty work. Moreau responds by shooting the Italian in the shoulder, then taking off to San Lorenzo, a country with no extradition. There seems to be a road trip in the team’s future.

This is a big episode for Eliot, who talks haltingly of having done things he’s truly ashamed of while working for Moreau. Kane handles the scene with just the right amount of burning regret and Eliot-like defensiveness in a well-written sequence that illustrates there are some lines that the Leverage group still fear to cross with one another.

The shootout, while a bit more lethal than what LEVERAGE usually supplies, is an energetic John Woo homage, complete with a pitch-perfect knee slide, impressive on a TV budget.

While Gina Bellman as Sophie doesn’t get to do quite as much as usual, she has fun doing an impression of a certain Alaskan former politician, and there’s a sweet, subtle building block placed in the relationship between Parker and Hardison (remember “pretzels” as a metaphor?).

The overall stakes are a little higher here than the norm, but this doesn’t feel like LEVERAGE is changing its stripes. It’s a good episode, leading into the last hour of the finale.

CLICK HERE for a review of LEVERAGE – “The San Lorenzo Job”