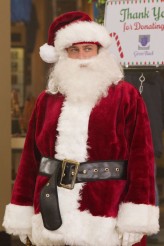 ‘Tis the season for holiday specials and TNT’s LEVERAGE is no different. Mixing in whimsy and festive good will with crime and heists is a mix made in Boston, the Leverage team attempt to stop a mall manager (Dave Foley) from ruining Christmas. The scam: to aid in his gambling debts, the manager has hired a bunch of criminal rent-a-Santas to plan the biggest holiday swindle of all in “The Ho, Ho, Ho Job.”

Of course, the Leverage team does what’s expected of them and it backfires horribly, because they didn’t expect Hardison’s (Aldis Hodge) mortal enemy Chaos (Wil Wheaton) to be the puppet master behind it all.

Chaos wants revenge on our heroes (they got him arrested last time they met) and he’s going to do it by being the biggest Grinch of all. 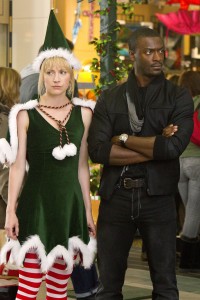 A Christmas-themed episode isn’t anything new to LEVERAGE (they did one back in Season One), but here, they have mall Santas to play with. The biggest kick is watching Eliot take down four other Santas – while in a Santa suit himself.

It’s also encouraging to see that Nate may have received the best present of all by episode’s end – Sophie’s real name (or so we think – she wrote it on a napkin, so one can only assume).

Plus, the return of Wheaton is a much needed surprise (he picks up exactly where

he left off during last year’s “The Two-Live Crew Job”).

The episode is filled with some great one-liners and also features the death of Hardison’s loyal van Lucille 2 (may she rest in piece). The twists and the double crosses are as sharp as ever, and you gotta love Parker in a sexy elf costume (what is it with that crazy elf voice of hers too? Infectious!).

Overall, “The Ho, Ho, Ho Job” delivers the Christmas goodies without getting too sappy itself and it’s a great way-station to next week’s two-hour season LEVERAGE finale that will hopefully wrap up all of Season Three’s loose ends.