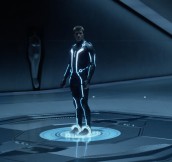 If any movie can be viewed as this year’s AVATAR, TRON: LEGACY certainly has a shot. Not only was it shot in 3-D (instead of being converted in post), it also features one of the  most visually arresting and immersive science-fiction worlds this side of the STAR WARS franchise.

TRON: LEGACY (which opens Friday) picks up the pieces from the under-appreciated 1982 cult classic TRON which put Kevin Flynn (Jeff Bridges) into a computer world where users and programs are pitted against each other

He survived, but Flynn went back into that world (after the events in the first film) and has been missing for decades as the new movie opens. Flynn’s son Sam (Garrett Hedlund) is all grown up and wants to know what really happened to his dad.

Well, he soon finds out. Flynn has been in exile in a computer world of his own making and now Sam must fight against Clu, a 35-year old “program” version of his father in order to get himself and his dad out alive.

In an exclusive interview, Justin Springer spoke to ASSIGNMENT X about the brave new world of TRON: LEGACY and what the challenges were in bringing a 28-year old film into the 21st Century. 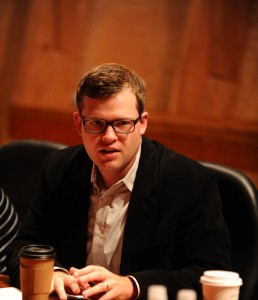 ASSIGNMENT X: I don’t think there is any other precedence of doing a sequel quite like this.

JUSTIN SPRINGER: I think it’s the longest time between original movie and sequel in movie history. We did our research early on, and couldn’t come up with any. There was RETURN OF OZ, but with a whole new cast. This is with some of the same cast. It’s also interesting, if you look back, TRON wasn’t a runaway success. TRON came out July 6, 1982, which was midway through E.T.’s 17-week run at number one.

AX: Why not remake TRON instead of just continuing the story?

SPRINGER: We were feeling too much of this “remake-itus” and thought “what if we continue the story forward.” It did leave you with Jeff Bridges landing on the top of Encom with this secret he had told no one about. It seemed interesting to us. If we did that in 2010, we’re not going to be a period movie. So you have to write the mythology for the intervening years. That’s an exciting opportunity, because you have two worlds to write about in order to arrive at a place where you’re present day. We thought, “Isn’t that an interesting way back into this.” [Original director and co-writer] Steven Lisberger had created this great universe, so why not build off of it instead of re-imagining it and we wanted to use Jeff Bridges as an actor, because he was one of the most interesting things, of many, about TRON. So that sort of required it to be a continuation of the story.

AX: Weren’t you worried that the audiences might feel out-of-the-loop if they hadn’t seen the original TRON?

SPRINGER: With all those things in mind, we realized, it’s been 30 years, we can’t make a movie for people who have just seen TRON. It’s difficult. You’re using that as your story foundation. When you’re showing it to a 12-year old who has never seen TRON, who doesn’t know anything about it, will they understand it? So that was sort of the challenge for us, but it was a fun challenge and look back and draw on the roots and mythology of TRON and try to fold everything into LEGACY.

The other hard part is not getting bogged down in it. “Here’s what the world is and why we’re here.” So if “that has to happen,” you don’t want it to get in the way of what’s most fundamental: a kid, who is sort of rudderless, whose dad is Steve Jobs or John Lennon, and now he finds a way to this world and reunite with him. It changes him forever and they go on this journey together.

AX: I was impressed that you actually made an impressive looking, PG sci-fi action film that both adults and kids could enjoy that didn’t rely on heavy violence or overt sexuality.

SPRINGER: This being Disney, we knew there are certain things you can’t do when you’re making a movie for that studio. The story didn’t require it anyway and you don’t have to go there. [Director] Joe [Kosinski] had a vision for this world that is more in line with BLADE RUNNER than any other thing. It has a tone and there is a dark side to the world, but you don’t have to rely on overt violence and blood and guts to get you there. I feel like the movie is cool, it has an edge to it, but it doesn’t rely on the obvious things to get you there.

AX: When did you realize you could successfully get Jeff Bridges to play off a younger, CGI version of himself?

SPRINGER: [Adam Horowitz and Edward Kitsis] came up with the story and it was interesting, because it was before [THE CURIOUS CASE OF] BENJAMIN BUTTON had come out. [Making actors look younger] was a new technology everyone was talking about. Was it possible to create photo realistic human beings? Photo realistic human beings is the hardest thing to do. It’s easier to create a photo-realistic “something you’ve never seen before.” We knew that technology was there, but not exactly.

The technology we used was also partially driven by Jeff wanting to perform in the scenes. [The younger Jeff] is not an animated character, it’s a performance capture character. It’s an all digital version of him at age 35, but Jeff is driving the performance. He would do this scene and we would capture this facial performance and then apply that facial performance to Clu and that’s how it was done. When we would do these scenes, Jeff would be there on set, with these actors, doing these entire scenes in character as Clu, and then we would take that data and apply it to the computer model.

AX: Is there anything else that you couldn’t do because of technology limitations?

SPRINGER: Joe’s philosophy is to photograph everything you can practically and augment it with visual effects when necessary. The costumes are all practical costumes and there are practical effects.The most cutting edge technology was to create the Clu head. Once we had the story, we thought about what’s the new technology and how can we fold it into this? What technology is available to us to tell the story on the page? In a world where there are so many amazing visual effects, and so many amazing action sequences, to be able to use visual effects to tell a better story is when you get ahead of the game a little bit.