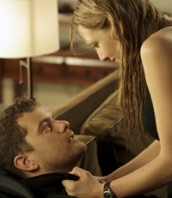 One of my favorite lines of all time in movies is from SE7EN when Brad Pitt screams “What’s in the box?!” – it applies to just about anything with a box because you never really know.

This box in particular in FRINGE is something just as nefarious as what was seen in that film. While not as brutal, the results are just as devastating. When opened, the box emits a soundless pitch that freezes whoever is nearby in their tracks – killing them.

Of course, this brings in the Fringe team and Peter (Joshua Jackson) in particular is interested as it seems to be some sort of strange weapon that couldn’t have been made by anything in this universe. Turns out, he’s right.

When Walter (John Noble) learns that if you can’t hear the sound there’s no way for you to be killed, Peter takes it upon himself to defuse the device when Thomas Newton (the guy from Season Two that had his head frozen, thawed then reattached and helped Dark Walter cross over to take Peter back to the alternate universe) places it in a subway for any unfortunate bystander to unleash.

So “What’s in the box!?” The first piece of the puzzle/bomb/something that Dark Walter is sending from the other side in order to peek the interest of Peter, who has increasingly become interested in such technology as well as his place (or key) to launching some sort of devastation upon this universe. Dark Olivia (Anna Torv) knew about the device and was happy to help innocent people die in order for Peter to find and defuse the device. She even went about killing a dude in her own apartment to cover her tracks … while at the same time romancing Peter (as he seems to be the only thing she cares about saving). Cold blooded to say the least.

I love that we are getting to see these different sides or different characters altogether from the same actors we know. While Olivia is still Olivia, she’s so much more evil and nasty. It is an awesome change from the emotional, nice and caring Olivia we are used to seeing. While some of the other members of the alternate universe Fringe team seem genuine (with the exception of Broyles (Lance Reddick)), I wonder if we’ll see their darker sides as well?