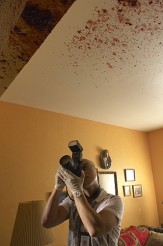 Dexter tries channeling his grief by engaging in his idiosyncratic hobby, while things come to a head with Astor

The DEXTER episode “Hello, Bandit” has a lot in common with Dexter (Michael C. Hall) – now that both have gotten past the shock of Rita’s death and figured out the direction they’re taking, they’re both slowly getting back to normal. This is understandable, but there’s a certain amount of clean-up and waiting for things to return to normal that’s more realistic than it is engaging.

The FBI catches up with Dexter, but it turns out he was with the Miami PD team investigating a crime scene at the time of Rita’s murder – the Feds just want to ask him if he has any idea why Arthur Mitchell (who they now realize is/was the Trinity Killer) would have targeted her. Dexter’s only response is, “Because he’s a serial killer?” Quinn is still investigating Dexter on the down-low while trying to get Deborah (Jennifer Carpenter) to stop being in total denial about their tryst.

Dexter feels the best way for him to be a good father is by returning to killing other killers – he makes the analogy to Harry’s ghost (James Remar) that it’s like the admonition on an airplane to secure one’s own breath mask before attending to that of a child, so that the adult can be calm and clearheaded. To this end, Dexter investigates a random splash of blood he finds in a car rental yard, which leads him to Boyd (Shawn Hatosy), a roadkill cleanup worker with the city’s Animal Control Department. Sure enough, Boyd is up to some very bad things.

Meanwhile, Dexter’s stepdaughter Astor (Christina Robinson) is forthright in blaming Dexter for Rita’s death, though of course all Astor knows is that Dexter wasn’t there, not that his failure to kill Arthur Mitchell earlier gave Mitchell the time to kill Rita. The situation deteriorates so much that Dexter agrees to let Astor go live with her grandparents. Astor’s younger brother Cody (Preston Bailey) wants to stay with Dexter, but Dexter, mindful of how much he and foster sister Deborah have relied on one another throughout their lives, doesn’t want to separate Astor and Cody. Astor softens enough to give Dexter a goodbye hug, and Dexter is left to be a single father to his infant son Harrison.

It’s a perfectly good episode (though shame on Dexter for killing a raccoon as bait for Boyd – yes, serial killers start with animals, but really, Dexter has outgrown that stage and the raccoon doesn’t fit Dexter’s target profile) and it’s necessary in terms of laying down the circumstances for the season, but the episode is so weighted toward Dexter dealing with his fatherhood issues that it feels a little out of balance.

The subplot of Deborah and Quinn investigating two murders apparently tied to Santa Muerte (something that cropped up earlier this year on BREAKING BAD) is promising, as indeed are all the other dominoes set up in “Hello, Bandit,” but now we’re very ready for things to start moving forward.