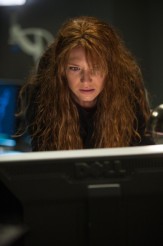 It is a shame more people aren’t watching FRINGE. Since moving to Thursdays last year, the show has steadily declined in ratings. I like to believe it is because of the heated competition rather than the fact people have lost interest in the show. 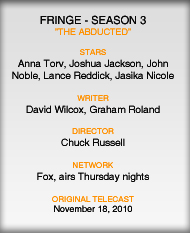 Seriously, how could anyone lose interest in this show? Week-after-week it continues to amaze and deliver the goods. This season especially has been quite enjoyable with the show alternating between the two universes each with their own perils and monsters. Granted, the monsters “over here” have been mostly generated from the bad guys “over there” trying to influence, disrupt or destroy this universe. Still, it has been a good mix as we continue to learn about the universe “over there” and grow closer to learning what Dark Walter (John Noble) is planning for “over here.”

More importantly, we are learning more about those alternates “over there” and their motives. For the most part, they are good people doing their jobs to protect the public from anomalies caused from when Walter initially crossed over to kidnap Peter (Joshua Jackson) and bring him back “over here.” But, others such as Dark Walter and Broyles (Lance Reddick) are less caring and more evil. And let’s not forget alt-Olivia (Anna Torv) that takes the cake for ruthless bitches. A far cry from her counterpart trapped in another universe.

Still, we don’t know what Dark Walter, or Walternate, is going to do in our universe nor why he is continuing the masquerade with Olivia, although we did get a bit more info about that in “The Abducted.” He knows that our Olivia has the power to transport herself between universes and wants that ability, obviously, for his own people given that up until this point he can only send shapeshifters “over here” without some grand machine. Olivia, of course, can do this as a result of the Cortexiphan doses she was given by Walter when she was a child, something that apparently alt-Olivia didn’t have happen to her.

Speaking of Broyles, it was apparent in a few episodes earlier this year that he was a good man. You could see that all the machinations that Walternate was scheming just didn’t jive with him even though he went along with it. That came to a head in “The Abducted” as Olivia helped find the people that kidnapped his son many years ago and stole some part of his life-force from him. But now that Olivia has mentioned the FBI tipped him off that she knew who she really was, what would he do? Not only did she find the kidnappers, but she saved his wife and son. He let her go.

Yet, her plan to utilize the tank in the DoD to get back to her universe didn’t work as Walternate got to her first pulling her from the tank.

The thriller aspect to this episode was really well done as it was fast-paced, but it was the set-up to what will probably be the fall finale of the show that this did a better job of building to. We’ll get the big payoff in two weeks when Peter finds out the truth and presumably Olivia returns. Should be a freaking phenomenal payoff.