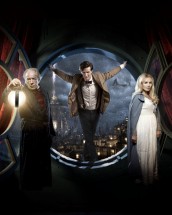 The dialogue sparkles like shining snowflakes, each a perfectly formed piece of well-wrought wit, and the performances leap off the screen in what may be the most moving and delightful DOCTOR WHO Christmas special since the tradition began in 2005.

“A Christmas Carol” rejoins the Doctor’s (Matt Smith) companions Amy Pond (Karen Gillan) and Rory Williams (Arthur Darvill) as they attempt to have a honeymoon trip on a futuristic space liner. “Attempt” is the operative word, since the ship soon plunges into a strange cloud belt surrounding a Victorian-themed colony planet. With death only an hour away, the Doctor has to convince the planet’s Scrooge-like despot, Kazran Sardick (Michael Gambon) to use a machine solely in Sardick’s control that can manipulate the cloud belt and save the ship. When Sardick refuses, the Doctor initiates a crazy plan to wholly remake the man’s past and turn him into someone that will save the day. Surely that can’t cause any other problems? Ah, the best laid plans of mice, men and Time Lords…

As brilliant as Matt Smith was in instantly creating a memorable and endearing eleventh incarnation of our favorite Time Lord, it may be that I had forgotten just how wonderful he was, since his triumphant first appearance in this special – a veritable verbal avalanche of tangential bon mots, whirlwind body language and heartfelt judgments of characters – is so intoxicating, you can’t wait for more. And you get it, but he’s only the start of this beautifully bittersweet journey.

Charles Dickens’ “A Christmas Carol” is one of the most retold stories in our cultural canon, not only repeatedly brought to life in countless direct adaptations in film and television, but through its basic structure and plot slyly incorporated into literally thousands of other media productions. That Steven Moffat and his team so brazenly took on the tale for their first WHO Christmas special and then didn’t even bother to come up with a different title for their version might lead one to think that perhaps they played it safe in their first holiday outing. 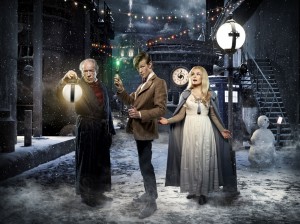 Such criticism falls flat pretty quickly. For one thing, the story actively acknowledges the existence of the original when the Doctor deliberately chooses the Dickensian classic as his strategy for remaking Sardick’s life. But far more importantly, Moffat’s take on Dickens’ work manages to reinvest it with all of the raw emotion that was originally intended. To see Sardick’s memories shift with every passing second, to watch Gambon’s face light up with love and revelation, is a moving experience and a tribute not only to Moffat and Co. but Dickens as well.

While series regulars Gillan and Darvill are relegated to the sidelines apart from a few amusing touches, they make way for a sterling contribution by Professor Dumbledore himself in a tour-de-force performance that breathes new life into the Scrooge stereotype. Eyes welling with tears, rage covering despair and a broken heart, a smile as bright as Christmas day lighting up his well-worn face, Gambon’s Sardick is a tragic but lovable figure.

Kudos must also go to Laurence Belcher and Danny Horn for embodying the two younger forms of Sardick, both with winning personalities. Welsh mezzo-soprano Katherine Jenkins, a somewhat controversial casting choice, carries off her relatively small role very well and her true talent is woven seamlessly into the plot to powerful effect.

As with so many of Moffat’s WHO stories, the intricacies of time travel play a huge role, at times bending and even breaking any logic that the universe might have in place to prevent such shenanigans. You can argue all you want about whether this violates some basic narrative rules, but then again, who says time travel can’t just be…fun?

The special effects and set design are superb, and although the Christmas specials are always meant to be more cinematic, it’s been a while since they’ve had a truly epic visual quality. Oddly, both producers of the new series are obsessed with alien life-forms that resemble Earth animals in every detail, but it’s to this team’s credit that they could sell something as ridiculous as flying sharks and make them not only beautiful but an integral part of the emotional arc at the story’s end.

Through it all, Matt Smith’s star-bright personality simultaneously grounds you in the absurdity while lifting you so far above it that it ceases to have any meaning. This is the perfect prescription for any Christmas Scrooge … or Sardick … and it will leave a wistful smile – and quite a few tears – on your face by the time the credits roll. This may be a bit too easy for me to say, but there has never been a better time to be a DOCTOR WHO fan, and now more than ever we should celebrate being able to gather around our television sets – UK and US viewers both – and share in the magic of a show that amazes our minds, touches our hearts, and soothes our souls. God bless us, every one!