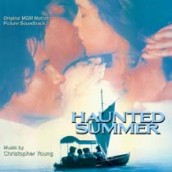 Christopher Young would grace many a low budget horror score with his eerily graceful melodies, among them HELLRAISER, A NIGHTMARE ON ELM STREET 2 and TRICK OR TREAT.

Just before he’d go on to the more bloodily prestigious likes of COPYCAT and THE DARK HALF, Young took a last stab for the mini-majors with this beautiful swan song to the very beginnings of horror fiction with Cannon’s HAUNTED SUMMER.

This was second (and far more lucid) cinematic rumination on the dalliances of Lord Byron, Percy and Mary Shelly and John Polidori- literary lions who would create vampires and science-stitched walking corpses during their 1816 season of sex, drugs and poetry. While rocker Thomas Dolby went for his weird science approach for Ken Russell for more lascivious take on the subject in 1986’s GOTHIC, 1988’s SUMMER is better in every respect at playing the poets’ unhinged creativity with erotic, Baroque chills. Yet many of Young’s musically fearsome touches are on hand (most notably his hellraising talent for music box melodies), as refined for a period of violins, keyboards, plainsong and even an Alpine horn.

In dealing with the excess of creative minds, Young conjured one of his most truly beautiful, and spectral scores, music that hypnotically winds about in long, intoxicating, synth-heavy suites. Even now, SUMMER continues to stand as one of Christopher Young’s most impressive works, as well as showing a real aptitude for experimental classical scoring (most recently heard in the equally turbulent, and elegant score for the Darwin biopic CREATION).

La La’s release collects Young’s original concept album along with the actual SUMMER movie tracks, which offers even more period pleasures. Though it might not be as visceral as his many blazing horror scores to follow, HAUNTED SUMMER has a transfixing, melodic quality that continues to sweep one into a miasma of artful madness.