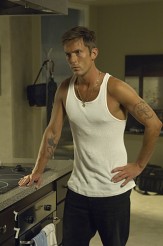 Dexter and Lumen share murder in this episode, which is intense even by DEXTER standards

Over its five seasons, DEXTER has come close to what happens in “Take It!” a few times. Dexter (Michael C. Hall) found a measure of mutual understanding with fellow killers Lila (Jaime Murray) in Season Two and Miguel (Jimmy Smits) in Season Three, but neither of them had a code and both eventually became his deadly nemeses due to their differences.

Now, however, Dexter has Lumen (Julia Stiles), whose motivations are sympathetic – she feels an urgent need to avenge her rape, torture and captivity at the hands of a ring of serial killers, the kind of men who are Dexter’s natural prey.

Lumen has even seen Dexter kill before, when he unknowingly rescued her by dispatching Boyd (Shawn Hatosy), who we now know to be part of a group. Lumen has identified Cole (Chris Vance) as another man she recognizes as one of the group of tormentors. Cole is chief of security for famous motivational speaker Jordan Chase (Jonny Lee Miller), but a little thing like that won’t stop Dexter. Realizing how much she needs to be a part of it, Dexter allows Lumen to help him prepare for the ritual and to be present during it. She seems to share Dexter’s needs in the same way that he experiences them.

Where this will go, we cannot tell, but the quiet fire within Hall and Stiles is a marvel to behold. Their performances – in the context of Manny Coto & Wendy West’s script under Romeo Tirone’s direction – are beautifully contained, yet brimming with soul-striking emotion.

Dexter also pegs Chase himself as likely being one of Lumen’s abusers, setting the man up for an unknowing fall. In the other two linked subplots, Lt. LaGuerta (Lauren Velez) throws Debra (Jennifer Carpenter) to the media as a scapegoat for the civilian deaths in the nightclub shootout, even though LaGuerta is the one who was in charge. LaGuerta’s husband Batista (David Zayas) offers his support to Debra, who ultimately commands his loyalty more than does his wife.

Liddy (Peter Weller) the disgraced cop turned private investigator hired by Debra’s police detective boyfriend Quinn (Desmond Harrington) to check up on the link between Dexter and the Trinity killer, leaps to a wrong conclusion when he learns that Lumen arrived in Miami a week before Rita’s murder. However, Quinn wants his relationship with Debra to move forward and is increasingly reluctant to pursue scrutinizing her brother – so Liddy tries blackmailing Quinn for money.

There are so many plates spinning in “Take It!” that we’re spinning ourselves by the end. What is Lumen becoming? How will this connection affect Dexter? How will Dexter – if he can – take out Chase without being caught? What’s going to happen with Liddy, his suppositions and his threatening attitude? What kind of hell will erupt at Miami Metro P.D. when LaGuerta finds her version of the shootout challenged?

These are all compelling questions, but in this episode, the whole is more than the sum of its story points, strong as they are. “Take It!” feels like it’s closing in on something at the core of Dexter’s being, without in any way being pretentious or sentimental about it. It’s rare to see this kind of layering in a television character, and rarer still to feel like we’re not merely being told about it, but rather having it revealed to us silently, as it is revealed to him.