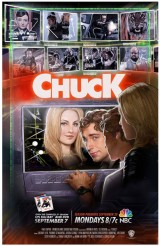 First off, you get Linda Hamilton as Mom Bartowski saving the life of Chuck (Zachary Levi) and then saying the infamous TERMINATOR line “Come with me if you want to live.”

Then you have Morgan (Joshua Gomez) roaming around air ducts barefoot and a wife beater aping Bruce Willis’ John McClane from the DIE HARD movies.

But the episode was more than nods to other movies, it was also a solid episode that finally resolved some major issues between mom, son and this season’s Big Bad Alexei Volkoff (Timothy Dalton).

Chuck’s mom has been deep undercover as a double agent with Russian Volkoff and she’s also been keeping it a secret that she has a son and daughter – one of which happens to be a super C.I.A. spy.

When Mom saves Chuck from henchmen sent by Volkoff, naturally Volkoff thinks she’s been taken prisoner. It seems that Volkoff has the hots for her, but she doesn’t reciprocate.

After some excellent allusions to DIE HARD, Volkoff discovers the truth about Chuck and Ellie (Sarah Lancaster) and invites himself over for Thanksgiving leftovers.

It’s awkward, and could potentially go bad, but ultimately, Momma Bartowski saves face and makes Volkoff promise never to hurt them – EVER.

Chuck gains some trust from mom, meanwhile Awesome (Ryan McPartlin) hands over the computer that Ellie has been trying to figure out which came from her dad. It’s not surprising the Intersect is on the computer and by episode’s end, Chuck has his kung-fu powers back.

Whether this is the new Intersect, is still a mystery until the series resumes in December.

There are some wonderful moments here, but some of the best is still the love/hate dynamic between Chuck and his mom. The interrogation room sequence is hilarious.

I also thought the Strip Kick class Morgan and Chuck take to get both of them into C.I.A. shape was also a great sight gag. That said, it’s also nice to see Awesome lay down the law for a change and give Chuck hell for spying once again (he had been keeping it a secret from him and Ellie).

Overall, CHUCK once again delivers a solid episode. It wraps up some loose ends, but leaves enough open to set up the second half of the season. Can’t wait to see where this leads. Now if the producers could get Arnold Schwarzenegger (now that’s he’s almost no longer California’s governor) to make an appearance before the season is up, it would be geek heaven indeed.