Home » Profile: Mark Wahlberg gets into the ring for THE FIGHTER 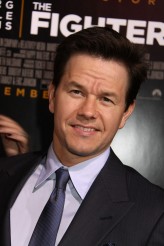 Profile: Mark Wahlberg gets into the ring for THE FIGHTER

For years, Mark Wahlberg has been trying to get a movie made based on blue-collar Irish boxer Micky Ward who managed to beat all odds to become a World Champion. Micky’s life was fraught with tragedy not to mention a fractured relationship with his brother Dicky, a former boxer himself that threw away his shot against Sugar Ray Leonard.

Now, after years of development (and almost five years of training Wahlberg put himself through so he would be ready to play Micky when they got the greenlight), THE FIGHTER has finally hit theater screens. Directed by David O. Russell and co-starring Christian Bale as Dicky, the film has proven to be an underdog champ at the boxoffice as well – doing better than many of the big-budget features that came out during the holiday season.

We asked Wahlberg to take five and tell us about the process of bringing THE FIGHTER to the big screen. 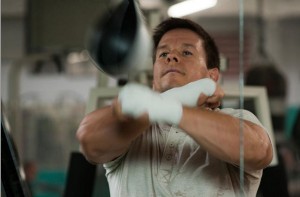 TAKE 1:
On wanting to tell this story since we was a teen …

“I first met Micky when I was eighteen years old, and was a huge fan,” says Wahlberg. “I thought, ‘this is the movie I should make.’ [Director] John Herzfeld and I went to Lowell to see Micky and Dicky and talked about the possibility, but we found they’d already sold the rights ten times over, and it had become such a cluster f**k that it seemed there was no way we’d be able to sort it out. Then five years ago, Brad Weston [President of Production at Paramount] called me and said he had a script to send me. It was about Irish Micky Ward the boxer. He said, ‘do you know him?’ I was blown away by the script and thought, ‘we’re getting this done.’ So I started training the day I got back from vacation. That’s how this whole thing began. Then we went from one co-star to another, different writers, directors, the whole thing.”

TAKE  2
On finding comparisons with his own life story …

“There were so many comparisons,” Wahlberg admits. “I am the youngest of nine kids. My brother was much more successful and was looked at as the chosen one, while I was the one in trouble. And I had to play Micky. Dicky was a flashier role, but it wasn’t about that for me. It was about being believable as a guy who could win the welterweight title, and not look like an actor who could maybe box a little bit. And those four and a half years [of training] turned out to be the best thing for me. But if somebody had come to me and said, ‘you’re going to have to train that long to make a movie,’ I’d have said, ‘I’m fairly athletic and willing to work hard, I can do this in six months.’ And I never stopped training, even when I was making other movies.’ I assured [Micky and Dicky] they would be portrayed in the light they deserved, that I cared about them, and was so proud of what they were able to do, in circumstances like that. That’s the only way I know how to do things.”

TAKE 3:
On making this boxing movie stand out from others.

“RAGING BULL is so different than ROCKY,” says Wahlberg. “Daniel Day-Lewis was very good in a lot of ways in THE BOXER.  We wanted to make one that was our own, but there was a little bit of the dark side of RAGING BULL, and some ROCKY. You see Micky Ward in any of his great fights, and they play like Rocky because of his style of fighting. And let’s not forget Hilary Swank [in MILLION DOLLAR BABY]. She looked good in there, starting out with no knowledge about a boxing ring. She’d never hit a speed bag, but she had heart and desire. She was fearless, and was willing to get out there and go for it. And towards the end, she started looking pretty damn good.” 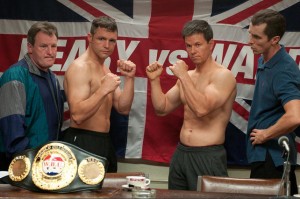 TAKE 4:
On what appealed to him the most about Micky …

“Micky is the most humble guy I’ve met in my life,” says Wahlberg. “He doesn’t feel bad that he only made a couple of seven-figure paydays when he was champ. He’s a Teamster now in Boston, takes pride in what he does, and has a gym where he trains people. He’s a warm, caring guy. Then you get in the ring with him. You think, ‘he’s my friend, I’m playing him in this movie, this will be fun.’ I’m very much like that too. The guy who tells the story through his eyes is a much more difficult part to play, harder than the part that has the flash, and is big and in your face. That was Micky.”

TAKE 5:
On using his connections with HBO to film the fight sequences …

“I wanted it shot like a real fight, so we used HBO, their cameras, their operators,” says Wahlberg. “These same guys who shot our fights [shot] the Manny Pacquiao vs. Antonio Margarito fight. The guy who directed them shot the Micky Ward-Arturo Gatti fight. Some directors we talked to about doing the movie said, ‘there’s no way you can do this in thirty-three days, you’ll need thirty days just to shoot the fights.’  I’m like, ‘what are we going to do for thirty days? Rub oil on each other, put the dolly in the ring, and all this craziness?’ With real fights, they get shot in twelve rounds, with a minute in between. These guys don’t miss a thing, and they don’t know what’s going to happen. We have the luxury of showing them in the morning what will happen, and to do it multiple times. We were using real fighters who weren’t messing around. And I thought we could do those fights in a day or two, but added a day to be safe. And we got it done in those three days.”