Home » Book Review: PEOPLE WHO DESERVE IT: SOCIALLY RESPONSIBLE REASONS TO PUNCH SOMEONE IN THE FACE 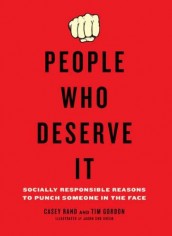 ©2010 Penguin
PEOPLE WHO DESERVE IT: SOCIALLY RESPONSIBLE REASONS TO PUNCH SOMEONE IN THE FACE
Reviews

It’s rare a book that comes along that captures the zeitgeist of pop culture in a nutshell, but for 2010, PEOPLE WHO DESERVE IT: SOCIALLY RESPONSIBLE REASONS TO PUNCH SOMEONE IN THE FACE is as cathartic as they come.

It’s a humorous look at the obnoxious annoying people who make you want to punch them in horribly painful ways. Before you think this is an excuse to live out your most carnal inner desires, be warned, the book makes you sign a release form so you can’t say in court “the book made me do it.”

At its heart, authors Casey Rand and Tim Gordon have created a hilarious, yet dead-on assessment of people who create every day nuisances of themselves and make everyone else around them suffer.

Each person gets a page or two devoted to their annoying habits. They range from the obvious “Cries At Anything Girl,” Super Snorer” and “Compulsive Liar” to more cutting edge offenders like “Continuous Sports Metaphor Dude” and “Bitch Who Talks on Cell Phone at Holocaust Museum.”

Each section is illustrated with equally humorous aplomb by Jason Sho Green.

Mixing things up are things like “People Who Deserve it Through Time” which includes the “Pay Phone Hog” and people who don’t deserve it like Brian Austin Green because he was on 90210 and the fact that he’s shagging hottie Megan Fox (“we salute you Greenie … you proved that even a D-list celebrity can still get Grade A ass.”)

The book also showcases various ways you can punch people on this list, as well as perfect times during the day for a nice love, slug-fest.

It’s all rather innocuous, but also provides the kind of wish-fulfillment humor books rarely seem to capture to its fullest. This is funny stuff and authors Rand and Gordon have hit upon a great new book franchise if this catches on. It’s a quick read, but it’s funny to the bone, and in an era of people who are out-of-work (and others who are over-paid), it’s nice to know many of us can find common ground with this deliciously satiric look at our truly screwed up world.