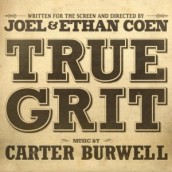 Carter Burwell rides high on the range for the Coen Brothers

It’s been a while since The Coen Brothers made a film as conventionally enjoyable as TRUE GRIT, let alone one that would allow their house composer Carter Burwell to engage in a full-blooded, mainstream score for them in the western genre he last trod upon with the modern cowboys of 1998’s THE HI-LO COUNTRY.

While there will always be a sly subversion to one of the more engaging directors-musician relationships in modern cinema, fans of original GRIT composer Elmer Bernstein will feel home on the range with the brassily vast scope of Burwell’s work, right from the thundering heroism of a gruff hero galloping out to blast the bad guys, all captured with the Americana tone that suffuses Hollywood’s vast, untamed wilderness. But like the film’s trailer that doesn’t begin to sell its welcoming black humor, what many will find most surprising about this listen is the spirituality that suffuses most of Burwell’s score.

There’s a nice, psalm like quality to much of his GRIT’s gumption, with a resplendent, thematic tone for orchestra and piano that’s heavily cut from the cloth of the 1855 religious hit “What A Friend We Have In Jesus.” Burwell’s almost soothing tone serves as both an ironic counterpoint to the film’s decidedly unforgiving actions, as well as to put true warmth into the character relationships.

TRUE GRIT is the real, yet unexpected western deal, something that can be equally said about the Coens’ film itself.

Shoot it out with Carter and The Coens HERE