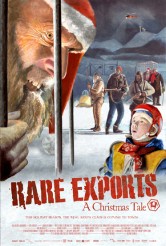 Fun young-adult Yuletide horror from Finland, with Santa Claus as the looming monster

If THE X-FILES had decided to do a Christmas episode for the R.L. Stine set, it might have been something like RARE EXPORTS: A CHRISTMAS TALE. Made and set in Finland, general vicinity where the mythical Santa supposedly dwells, RARE is a horror movie pitched at kids, with bits of gore (dead animals, a bitten ear) but mostly a sense of menace and black comedy.

RARE EXPORTS puts for the premise that the real Santa Claus is not only the basis for some very scary stories about a giant who eats naughty children, but that this archetype has been buried for centuries under a mountain on the Russia/Finland border.

A businessman has hired a team of “archeologists” to excavate the mount. Pietari (Onni Tommila), a little boy who lives with his preoccupied dad (Jorma Tommila) in an isolated community on the Finnish side, overhears the workers talking and concludes they are indeed trying to dig up Santa. Pietari then does some research on the Christmas icon, and what he finds is pretty alarming – even before a reindeer herd is found slaughtered, the mountain excavators vanish and local kids start disappearing from their homes.

Writer/director Jalmari Helandar works on the knife edge of suggestion, comedy and what works for adults, yet can safely be shown to youngsters (at least the adventurous ones). Pietari is young enough to still believe in the conventional Santa Claus, so his discoveries are at once doubly shocking to him and something he can readily accept. Part of the pleasure here is the inevitable realization by Pietari’s dad and friends that the threat is real. What the grown-ups try to do about the situation is a good twist that keeps us in suspense from both the supernatural standpoint and a more reality-based, what-happens-now view.

Onni Tommila is an appealing, restrained young actor and Jorma Tommila, who resembles a young John Savage, is affecting as his overburdened single father. Filmmaker Helandar is also shrewd in the way he uses the gorgeous, bleak locations, making the most of what seem to be sparse production resources.

Some aspects of RARE EXPORTS may not play for some American audiences, as the ideal U.S. target audience – viewers aged about eight to eighteen, though all horror/folklore fans will be intrigued – are not always big on films with subtitles. This notwithstanding, if you and/or the young folks in your life like spooky folklore, snowy menace and brave young heroes, RARE EXPORTS: A CHRISTMAS TALE fills the bill.