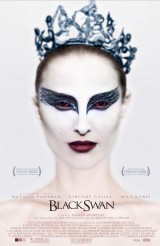 Dancing can be dangerous, and not just physically. The canon of ballet narratives is full of tales of people (mostly women) who dance themselves to death. Michael Powell and Emeric Pressburger’s seminal 1948 THE RED SHOES famously turned a Hans Christian Andersen fairytale into a fable set in the world of ballet. Now director Darren Aronofsky uses the classic SWAN LAKE as the backdrop and catalyst for the potential implosion of his heroine.

Natalie Portman plays Nina, a young ballerina in the corps de ballet of the company run by the demanding Thomas (Vincent Cassel). Nina dreams of landing a lead role, apparently not only because she’s ambitious, but because it gets her out of the stifling apartment where she lives with her mother (Barbara Hershey), whose own dancing career was ended when she became pregnant.

Nina’s dream would seem to have come true when she’s chosen to star in Thomas’ new take on SWAN LAKE, with both the innocent white swan queen and the malicious, seductive black swan played by the same dancer. But having her wish fulfilled seems to cause Nina only stress. Thomas mercilessly badgers her about having too much technique and not enough heart. Lily (Mila Kunis), a new dancer in the company, may be angling for Nina’s job. And increasingly violent hallucinations plague Nina both waking and sleeping, until she is not sure what’s real in terms of both what’s going on around her and her own actions.

Because we see Nina’s world almost entirely through her eyes, save that we’re watching her, her confusion and fear is our confusion and fear. We can be reasonably sure she’s hallucinating when she sees paintings on the wall start to wink and whisper at her, but it’s less clear as things get more sexual and more violent whether these interactions are happening as Nina experiences them or are simply distorted perceptions, filtered through a mind under extraordinary pressure.

The ballet moves on display are impressive. Dance experts may perceive shortcomings, but for most moviegoers, Portman’s ability to perform the choreography looks like the real thing, and any anxiety the actress may have channels into Nina’s worries about her performance.

The screenplay by Mark Heyman and Andres Heinz and John McLaughlin, from Heinz’ story, leaves it unclear whether Thomas is meant to be a really crappy director so far as communicating with his performers or if we’re simply hearing him as Nina hears him. Either way, his ceaseless belittling of her work as the black swan – he keeps telling her she needs to “free herself,” i.e., become more seductive, without ever giving her specifics on how she might achieve this – makes us wonder about his qualifications to run a company. On the other hand, we can also see how his demands are pushing Nina further into her singular state.

Also strongly in the mix is Lily, Nina’s combination rival/confidante/alternate self. Kunis is assured in both the friendly and mean-girl aspects of the character and Hershey brings some humanity to the mother, whose projection of her own needs into her daughter’s life are reaching suffocating proportions, even as we understand her concern for Nina.

BLACK SWAN is physically gorgeous and involving as a look into the pressures an artist places on herself, sometimes going so far as to use the horrific as metaphor. The film is arguably on much shakier ground when it tries to talk about sexuality. There’s a suggestion that Nina must be able to seduce herself in order to seduce the audience, but by the time we get to this notion, there are so many distracting elements in play that this doesn’t feel like it’s what’s really going on.