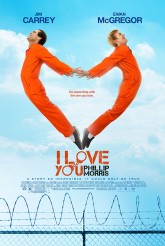 To clear up one possible area of confusion at the outset, I LOVE YOU PHILLIP MORRIS is not about someone who has fallen for the tobacco company of that name. Instead, it is the fact-based story of Steven Russell, a con artist who managed to non-violently escape from jail on four different occasions and for awhile pulled off a number of astonishing cons, many of them to assist the love of his life, Phillip Morris.

For those mindful of cinematic history with a CELLULOID CLOSET slant, it’s hard not to wish that, just once, movies about gay con men could have leading characters who are cool. Yes, we can all be grateful that we’ve moved on from the days when gay men were depicted as mostly homicidal, suicidal or peripheral, and yes, there are movies about straight con men like THE INFORMANT! where the main character is about as uncool as can be. Even so, I LOVE YOU PHILLIP MORRIS isn’t the film to buck the mini-trend of stories about gay men with amazing plans who nevertheless trip themselves up because they have a blind spot that seems connected to their sexuality. We see the occasional movie about heterosexual criminals where their partners don’t cause them to lose touch with reality. Maybe someday we’ll get a gay one.

To be fair, I LOVE YOU PHILLIP MORRIS seems to want things every which way. The filmmakers have Jim Carrey as their leading man and sometimes want him to be ironically insightful, sometimes skating on caricature, sometimes genuine and sometimes with a touch of the farcical. It’s a mixture that doesn’t feel entirely cohesive, even for a character as mercurial as Carrey’s Steve, a con man who bounces from Georgia to Texas to Florida back to the Lone Star State, where he keeps getting incarcerated.

Steve starts out as a churchgoing husband and father, but even though he never stops loving his wife (Leslie Mann) and child, he’s gay. When he comes out, he heads off for the high life in Key West, and starts engaging in all kinds of fraud to support himself and boyfriend Jimmy (Rodrigo Santoro). When Steve winds up with a hefty prison stretch, he meets shy, sweet Phillip Morris (Ewan McGregor) in the penitentiary library and promptly falls head over heels … we think.

Here’s the real rub. Writer/directors John Requa & Glenn Picarra, making their directorial debut with their adaptation of Steven McVicker’s book, find a great throughline through Steve’s adventures. There are a couple of moments where, whether they really happened or not, we find ourselves gasping at the character’s audacity and tenacity.

However, neither the filmmakers nor actor Carrey appear to be able to make any distinction between when Steve is full of baloney and when he’s sincere. We’re a little too much on Phillip’s side when he yells, more than once, “How can I believe you?” Normally, actions speak louder than words, but Carrey makes Steve sell so hard when he’s with Phillip that not only can’t we see what his sincerity looks like, we can’t see what sort of difference Phillip is making on him.

McGregor is sweet and gentle as Phillip, but he’s a little old for the level of naiveté the character possesses, making us wonder if Phillip is intended to be a little slow, or whether he’s simply under-written. The actors are enthusiastic, but can’t work up the kind of affinity between their characters that would let us feel romance.

This said, Carrey and Steve have their moments. A terse, trenchant observation in the narration as Steve explains a seemingly impossible aspect of one con is enough to bring the house down and there are moments when Carrey and the filmmakers let us virtually read Steve’s mind. These are great and we wish there were more of them.

At the end, a postscript tells us what happened to Steve after the events of the film, but not what happened to Phillip. This omission is indicative of what came before: Steve may be motivated by Phillip, but that relationship is not ultimately what he’s about. Which would be fine, except that he and I LOVE YOU PHILLIP MORRIS keep insisting that it is.