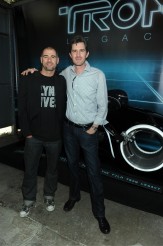 One of the most important creators of this brave new sci-fi world talks about the vehicle designs as well as his work on next year’s CAPTAIN AMERICA: THE FIRST AVENGER

While the world of TRON was first envisioned by Syd Mead in 1982, Daniel Simon was given the task of updating and taking that world’s vehicles (light cycles and all) and updating them for 2010 in TRON: LEGACY (due out Friday). 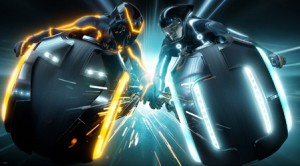 The end result is a stunning universe filled with an array of different designs from from off-road racers to the re-envisioned light cycles. It was a challenge Simon was more than up for as the story finds Sam Flynn (Garrett Hedlund) sucked into a computer grid searching for his long lost dad Kevin Flynn (Jeff Bridges) who has been held captive by a 35-year-old “Program” version of himself.

In this exclusive interview, Simon spoke with ASSIGNMENT X about working on TRON: LEGACY as well his forthcoming work on next summer’s CAPTAIN AMERICA: THE FIRST AVENGER.

ASSIGNMENT X: How much was it going back to the first TRON movie and saying, “this is what I liked, this is what I didn’t” and now “how do I reinvent the world?” 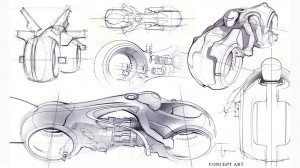 SIMON: Just the fact that we’re sitting here talking about vehicles shows you how important it was in this film. The pressure was a little high, knowing how much this means to Disney and to my personal career because this was my first feature film. You look to relieve yourself and take pressure off. You look at the first one to see what they did. These are not some anonymous people who did the first film. Syd Mead is one of the key people from the original film and a personal friend, so I could pick up the phone and say “what do you think?” I left him alone and didn’t want to bother him with that.

AX: What were some of the challenges in designing the vehicles?

SIMON: You come here as a young kid and establish a new aesthetic, especially for a new audience that joins us on this ride. You want to see kids playing with the toys and you think about how do you make the designers happy? You can’t be too technical and too fancy. Everything is pretty sleek, almost like a video music clip where it’s so blended together in a nice way. 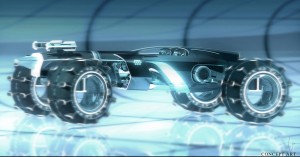 AX: Were there things you couldn’t do or couldn’t crack?

SIMON: I had a little meltdown on the design of the big jet. I had a much different vision of it than [director] Joe [Kosinski] had. We always agreed on everything, so we had another artist, who paints, to kick start my brain a little bit. So he did some drawings, very rough and Joe saw something in that. I took that and rebooted it and went “yes, now I know.” I went too speed jet with them, almost Delta wings, and Joe was looking for something more like a sailor with long thin wings – and very graceful. That’s all I needed to see to get back into that. The next big issue was there was so much stuff going on in this airplane. There’s a discussion in the cockpit, Sam goes back in the turret, the wings fold up, the hatch goes down. There is no smoke and mirrors in this movie – you can see how all of this works and you have to design it. Even in the turret, I have to go “how long are Garrett Hedlund’s arms so I can design the turret around him?”

AX: Were there any vehicles you aborted?

SIMON: The script was still in flux when I came on. They always talked about this buggy thing – something that transforms a racer into an off-roader. It was essentially turning a Formula 1 car into a Jeep Wrangler somehow, but still looking like a car. Joe wanted everything to look realistic, but in a parallel universe kind of way. That was challenging.

AX: Thankfully, nothing in the movie feels like a variation of TRANSFORMERS where things happen because it’s cool, not because it’s practical. Everything feels very organic and original.

SIMON: Generally, when I go to movies and design shows, it’s so over-the-top and over-saturated with effects. I travel to Japan once a year. There you have this beautiful contrast. You have total over-saturation and this world where everything is so clean and simple. Everybody can draw a car with ten guns and a turret and a big exhaust, but the key is having it work with no screaming sounds. Even our transformation from the grid car to the off road car – it’s a very simple aesthetic. We were very conscious about it. It wasn’t because we had no time, it took even more time to make something simple. 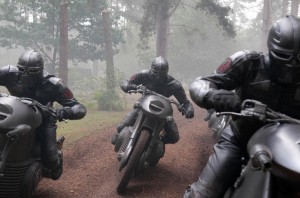 SIMON: It took me like ten minutes to adjust. Jeff Bridges just did a western movie [TRUE GRIT] and as an artist you look for that same challenge. I could not design TRON stuff every day of my life. On CAPTAIN AMERICA, I was lead vehicle designer and I designed seven hero vehicles from cars to a submarine. The fact that there is rust and rivets and dust was nice, as well as creating something very familiar. There we wanted to have a look that the Hydra really existed – they really built this. Sometimes there is a critique that “oh, they didn’t go far enough,” but there is a window where like “oh, my God, they went pretty far.” The more you look at stuff, the more you believe it. What they researched back then in the 1940s is phenomenal. They drove 250 miles an hour in an Audi Streamlined car in the ‘30s and if you put this in a car show now, it still looks more modern than anything you see today. There was the Schneider Trophy where they speed battled planes. They looked so sleek and modern and they were from the ‘30s. The more you know, the more you can tell, “oh, that’s actually right on.”

AX: If there is another TRON movie, is there a vehicle you didn’t get to do that you would like to do?

SIMON: I’m fulfilling this dream on the [TRON] animation series TRON UPRISING. There are a lot of new vehicles I can jump on now and there’s a little less pressure. There’s an endless army of things you can do. On the other hand, I don’t want to butcher it. I will never design a TRON bicycle, I’m pretty sure about that.

AX: But you will do a tricycle?

SIMON: I will do a tricycle. You have my word. [laughs]. We actually thought for fun, how about a sidebar light cycle, and I’m sure there’s an awesome design waiting for it on the show somewhere.

AX: When is the animated show happening?