These action epics return listeners to the days of high adventure

For baby boomer fantasy fans, there were never better days than the early 80’s when it came to seeing sweaty, near-naked barbarians hacking their way through the Hyborean Age with sex and gore to spare. But in a period that’s fondly remembered for the cheesy likes of ATOR THE INVINCIBLE, YOR, HAWK THE SLAYER and THE SWORD AND THE SORCERER, one film truly took the genre seriously, with all the production polish to spare. And 28 years later, John Milius’ adaptation of Robert E. Howard’s CONAN THE BARBARIAN still remains the king of this genre, whose blood and thunder score by Basil Poledouris remains the one fantasy soundtrack to rule them all.

A masterwork of Prokofiev-esque intensity whose acclaim rings far outside of the nerd set, CONAN stands for many as one of the greatest film scores ever written. Though its CD variations have gradually expanded on the original LP program, Poledouris’ acolytes had always dreamed of seeing a release of CONAN’s music in all of its wonderfully florid, Crom-chorus’d glory. Now that day has come at last with a robust re-performance by the Prague Philharmonic Orchestra and Chorus, under the baton of Nic Raine. Even if these may not be the original tracks (which probably reside in Thulsa Doom’s flesh-filled vats by this point), fans certainly won’t be disappointed by the majestic passion that’s gone into this two-CD set and its 100 minutes of Poledouris glory. 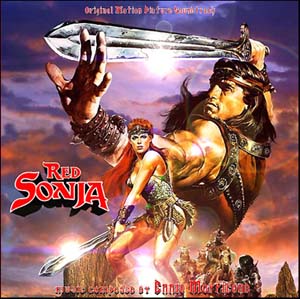 If CONAN THE DESTROYER was a pale, campy shade of CONAN whose saving grace was Basil Poledouris’ score, then Ennio Morricone could be  called the musical Jesus of the lamentable sort-of follow-up RED SONJA. DESTROYER director Richard Fleischer was reunited with star Arnold Schwarzenneger, whose character understandably took the pseudonym of “Prince Kalidor” to accompany Howard’s warrior woman on a rote revenge quest. So close your eyes, and imagine the far more spectacular film that Morricone scored. No stranger to writing great music for the likes of TREASURE OF THE FOUR CROWNS, Morricone’s RED SONJA stands as a mini-masterwork for something far less than that.

Better yet, Morricone went on his own, inimitable path here instead of trying to go on the Prokofiev route already taken, and pretty much unmatchable by Poledouris. If anything, RED SONJA’s tone could just as easily fit a knightly adventure, right from the “Main Title” that majestically gallops along with trumpet and chorus in hand, as female voices reach a beautifully religioso, revelatory tone for “The Talisman” and “Sonja and the Swordmaster.”

And where Poledouris CONAN’s music made it unmistakably take place on the Russian steppes, Morricone goes for more of an Oriental sound in his brassy action music for “Temple Raid” and “Fighting the Soldiers,” where choral shouts of “Sonja!” join in the fun before the voices deliver a pounding payback for “Sonja Defeats the Queen.” Yet Morricone uses the vocals in an exciting, instead of goofy way (a feat recently pulled off by James Newton Howard as he daringly injected chants of “Salt!” over that self-titled film’s score).

It’s during SONJA’s latter stretch where you really hear the melancholy sweep that’s trademark Morricone, first with the grandeur of “Sonja Teaches Tarn,” then as the  “Treasure in the Cavern” swells with an orchestral yearning worthy of “Tristan and Isolde.” The meaningful heroism of “Sonja and Kalidor” could just as well accompany two men with no name as they sauntered down the range, a barbarian-western vibe that builds with brass flair before percussion and an ever-building orchestra and chorus give a heroic uplift to finish this relatively brief, but worthy musical saga.

RED SONJA remains a textbook example of how a brilliant composer can elevate absurdity to the heights it’s haplessly striving for. Previously issued on a long out-of-print Varese Club CD (along with Morricone’s exceptional, and still-unreleased score for the far more execrable movie BLOODLINE), this extended SONJA sounds unexpectedly terrific, especially given how hard it was for Perseverance to track the musical elements down. SONJA is a true Morricone re-discovery that’s best played in your imagination, the place where film music can truly become the stuff of legend. 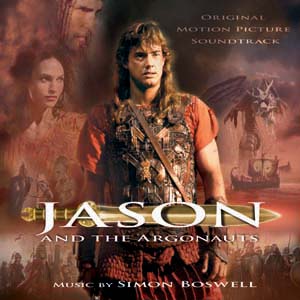 It’s more than likely that the creator of CONAN and SONJA was inspired by the sword-slashing heroes of yore, of which JASON AND THE ARGONAUTS rank high. Following Zeus instead of Crom, this strapping young man and his crew slew hordes of beasts for the glory of the gods. While no one was going to forget Ray Harryhausen’s dueling skeletons, Hallmark had the stones to attempt a two-part TV re-telling of the saga, one more faithful to Homer’s source material.

Certainly one of JASON’s bigger inspirations was hiring Simon Boswell to do a huge, orchestral score to accompany the quest for the Golden Fleece. Having grown from uniquely quirky scores for such genre favorites as DUST DEVIL and SHALLOW GRAVE, fantasy films would help Boswell’s orchestral talents grow with the likes of such fantasy scores as A MIDSUMMER NIGHT’S DREAM and PHOTOGRAPHING FAERIES, Boswell delivered the epic goods for JASON with a sound that belies its small-screen origins.

And though there’s certainly the feeling of valorous romance that Bernard Herrmann had given to the1960 original, Boswell’s work is also as hard-edged as our heroes’ shields and swords. Clashing, swirling brass drive much of the Argonauts’ battles with human and beast. Where you had resplendent washes of themes, Boswell reflects more of a striving humanity to Jason, the sound of a kid becoming the stuff of legend in a resplendent orchestral world fraught with danger, musical twists and turns that carry the sweepingly epic punch of a score like STARGATE by “The End of the Quest.” By shirking the classic sound of the past, but not its ideals, Boswell finds his own, powerful voice for this newfangled JASON. It’s a musical quest worth taking.

Give praise to CONAN HERE, swing with SONJA HERE and take a musical quest with the revamped ARGONAUTS HERE