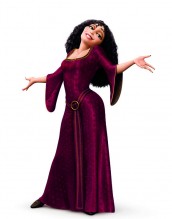 Providing the voice for Disney’s latest villainess was a task this former STAR TREK: INSURRECTION actress was up for

One of the most delicious aspects of the new hit Disney animated film TANGLED was the creation of Mother Gothel. Stealing away Rapunzel from her Royal parents at a young age (so she could tap into the girl’s magical hair to stay young forever), Gothel is a wonderful creation filled with malicious intent, mass contradictions, misguided motherly love and of course, the expert knack for breaking into show-stopping songs.

Breathing the character to life vocally is Broadway actress Donna Murphy (SPIDER-MAN 2, STAR TREK: INSURRECTION) who talked with ASSIGNMENT X in this exclusive interview about the Disney process and her diverse fanbase

ASSIGNMENT X: What was your take on Mother Gothel when you first read for the part? 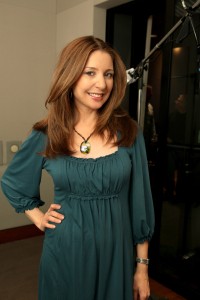 DONNA MURPHY: Often when you do these projects, you’re not given a complete script. They’re very protective about that. Some times, it’s incomplete, they don’t want you to see it until it’s complete, and although it was constantly evolving over the whole year I was recording it. I had a number of her scenes and her name, which is a great name. I always play detective and look at the writing and cull clues from it. She appeared to have all these mothering qualities and at times, I believed she was conjuring them very strategically to manipulate Rapunzel and affect her in certain ways. I remember being struck with the manic nature of this and which came first, the chicken or the egg? Had she always had that in her nature, or for the first time in her life was she was taking care of somebody and was like “I have to do everything I can to keep this girl happy and stay here.”

I knew from what they wrote as a character description, they wanted her as funny as she was frightening, but yet believably warm and loving, even though at her core, she was motivated by her own selfish needs. That to me was very clear and I knew how to make that work in the scenes and I think the writing supports it in ways for it to be funny, then for it to turn on a dime and not be funny at all.

AX: Did you have an open dialogue with the animators and writers?

MURPHY: I wanted to know what they were envisioning too from what they were thinking or hearing in their heads, so I had some questions. They had answers for some and others they said, “we don’t know.” They also had some fabulous ideas, but not literal thoughts of who she had been, but influences for the type of performance they were looking for and characteristics. This is the type of woman who was a performer at heart and envisioned herself in the spotlight. She thought of herself as glamorous in a 1940s movie star kind of way. That just spoke to me. That to me triggered things about the way she moved.

Even though, one would think, you’re just providing a voice, why would you be concerned with the way she moved, but as an actor, I really didn’t approach it as just providing her voice. I approach creating a role where you would see the whole self. I need to use my whole body to find her. When they talked about how theatrical and flamboyant they wanted her to be, as a last resort, the last choice would be to intimidate Rapunzel. She’s like living her life as if a camera is on her, and it sparked so many ideas about her behavior.

AX: After 18 years, she has to have a little love for Rapunzel.

MURPHY: Rapunzel would have to be some kind of idiot if she remained in a circumstance where it was a dark and not nurturing environment with a woman who was only nasty to her. The audience would dismiss Rapunzel immediately as somebody who was numb somehow. It had to be somebody Rapunzel would feel cared for by. I also think, Rapunzel being who she is, in this telling of the story, she’s so bright and engaging and spirited, that I don’t think this is what Mother Gothel probably intended or imagined this relationship might have to be. She started to fall in love with her, like a parent falls in love with a child. She can’t help but feel these feelings for her. I some times imagined that she has to have a talk with herself, “hey, hey, remember, this is about taking care of yourself,” but because she doesn’t want to feel too moved by what she feels for Rapunzel and what Rapunzel’s needs are, she just can’t help herself.

AX: And if you think about it, she has eternal youth, but she has to take care of this kid, so how much time would she really have for herself?

MURPHY: All this eternal youth, yet she doesn’t have a life. Her life is all about Rapunzel. I think this is the first sustained intimate relationship Mother Gothel has had in her entire life. I don’t think she knows how to relate to everyone. Rapunzel is everything to her.

AX: You’ve done a lot of stage work, but you’ve also been in two big franchise movies – SPIDER-MAN 2 and STAR TREK: INSURRECTION. They’re very different audiences. I’m curious the reaction you get from fans from that side of things. Can you identify pretty quickly when fans are going to approach you, from which camp they fall into? 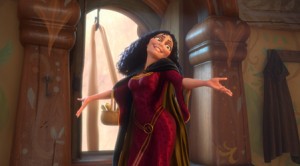 MURPHY: I remember when I did INSURRECTION, they said “this is the end of your life as you know it.” I have felt, it’s interesting to have another faction of an audience that are somewhat interested in other areas of my career who will show up at a stage door and come to see me in a musical, which they might have never attended before. That’s kind of cool. Can I see them coming? Some people are more obvious than others, because they’re carrying every piece of STAR TREK memorabilia under their arm. And others surprise me, because they will have a conversation with me at the stage door about what they just saw, and then they’ll whip out five photos from INSURRECTION and say “why haven’t you been at a convention?” To me, it’s interesting to have that opportunity to work in different mediums, but in different types of films with some very strong audience bases in these different areas and have had response from those.

AX: And now you have a third component with TANGLED, where you’ll be forever identified as Mother Gothel, whenever they need your voice for a spin-off movie, game or this or that.

CLICK HERE for more interviews and reviews from TANGLED