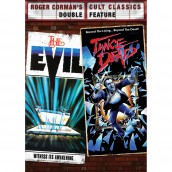 When it comes to exploitation classics, Roger Corman was the King of the B-movie and through the films his production company produced themselves to the acquisitions they made, it’s proving to be a boon for horror and science-fiction fans with the cool new ROGER CORMAN’S CULT CLASSICS DVD line courtesy of Shout! Factory

The latest release is a haunted house double feature of 1978’s THE EVIL and 1988’s TWICE DEAD. 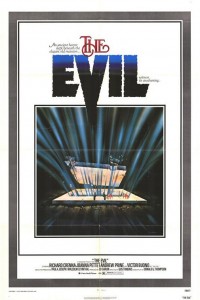 Clearly, THE EVIL is the “A” title of this B-movie package. Even with its massive shortcomings, it’s an effective little horror thriller starring Richard Crenna as a psychologist who decides to fix up an old mansion as a potential rehabilitation clinic.

Of course, he doesn’t heed to the warnings of the ancient “evil” that’s surrounded this place for well over 1000 years. And naturally, while he and his group of renovators, students and former junkies get settled in, Crenna accidentally unlocks the door to hell that the previous owner had sealed shut.

From there, the ancient “evil” is unleashed and starts playing mind games (not to mention physical attacks) on everyone. Naturally, it won’t let anyone leave unless they’re all dead or sucked into the earth.

Pacing problems plague this film, but that’s typical symptoms of low budget horror like this. Long, drawn out dialogue scenes that go nowhere also stop the momentum of the film dead in its tracks. The suspense beats are also poorly choreographed and often telegraph something creepy is going to happen before it does. The film is choppy at times too.

Yet, for all its shortcomings, it’s still an entertaining old-fashioned ghost story. The low budget benefits the film in more ways than a bigger budget would alllow and it makes up for things with some creepy angles, some cool in-camera special effects and some pretty impressive fire gags.

The film does fall apart a bit toward the end when the big reveal of the ancient “evil” is actually comedian Victor Buono?!? Go figure. It’s one of the weirdest moments in the movie and actually takes you out of the film momentarily. Yet, it’s such an oddball, bizarro sequence, it actually makes THE EVIL stand out as more than your average run-of-the-mill low budget movie. Not sure what people made of it in the ‘70s when it was released, but I have to give props to director Gus Trikonis for trying something ballsy like this.

This movie comes with commentary with director Trikonis, writer Donald Thompson and director of photography Mario Di Leo. Their conversation is quite engaging, and you get some insight into how the movie was filmed and also the controversy over filming the “evil” as an actual person (in particular Buono). They talk about how that sequence would have benefited from CGI to make the evil more supernatural and wispy – but on a 1970s low budget it was out of their reach.

Second billing goes to TWICE DEAD, an interesting, but utterly forgettable slice of 1980s cheese about a family moving into a crime-riddled neighborhood and into a mansion haunted by an old-time actor. DIFF’RENT STROKES actor Todd Bridges pops up in a few scenes, which was obviously a great, quick payday for the star.

The movie tries to go for something different – particularly with the old-time actor sequences being quite creepy. However, the film just doesn’t have enough momentum or ingenuity to rise above most 1980s exploitation – in particular the gang scenes which just take the air our of the haunted house aspects of the film.

There’s some cool death sequences (of the cheesy variety), but for the most part, this is deadly dull even with perky Jill Whitlow as one of the leads. She’s easy on the eyes, but the film isn’t.

Director and co-writer Bert Dragin and lead actor Tom Bresnahan provide audio commentary and there’s even a recent interview with actress Whitlow (who’s aged quite gracefully). The interview goes beyond just TWICE DEAD, she also talks about working on WEIRD SCIENCE (and with John Hughes) and NIGHT OF THE CREEPS as well as why she dropped out of the industry (hint: she became a mom).

Both films feature brand new anamorphic widescreen transfers – probably making these movies look better than they ever have. THE EVIL has aged much better than TWICE DEAD – just in terms of production value and a timeless quality surrounding the film (sorry TWICE DEAD, the ‘80s references really do date you into the ground on this one).

Like many of the ROGER CORMAN double features, you can watch the movies separately or as part of an “exploitation” experience with trailers and “preview” and “feature Presentation” tags.

Either way, not a bad haunted horror movie double feature to spend the night in front of the TV. Both are better than most direct-to-DVD films you’ll find nowadays, and the care that went into these reissues makes them perfect for die-hard horror collectors.