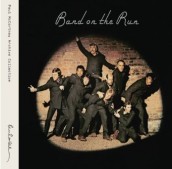 This 1973 classic album showcases the former Beatle in fine, rock and roll form

When you’re part of the biggest band ever, what’s a poor boy from Liverpool to do?

How about start a new band with his wife?

When the Beatles disbanded in 1970, and the Fab Four went their separate ways, with both John Lennon and Paul McCartney finding musical partners and muses with their wives (Lennon with Yoko Ono, McCartney with Linda Eastman).

Both produced mixed results, though Wings, McCartney’s band with Linda, had the most longevity and the most consistent chart-topping success.

It’s hard to top the Beatles, and although all four band members came pretty damn close after they broke up (John Lennon’s “Imagine” comes to mind), they primarily moved forward using their considerable talents to expand on their strengths and also eke out a brand new identity in a radically changing musical 1970s climate.

For Wings, rock and roll was its bread and butter and coming off of the hit theme to the James Bond film “Live and Let Die,” they were ready to push the boundaries on their third album which would become known as BAND ON THE RUN.

Hands down, this 1973 release is their best and most consistent disc. There are latter-day Beatles flourishes throughout, but for the most part, this sounds like the kind of band McCartney would have had with or without the Beatles.

On this Deluxe Edition (featuring the original CD, a disc of Bonus tracks and a DVD), the remastered sound and lush arrangements reminds us how talented and eclectic McCartney’s tastes have always been. 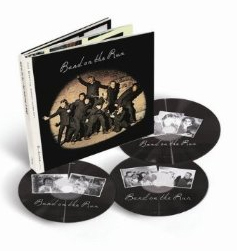 The album kicks off with the amazing title track “Band on the Run.” As memorable as the chorus to the song is, it’s always amazed me how avant- the track is – segueing from one tone and tempo to the other. The fact that it was a radio hit with all of its idiosyncrasies, is a testament to McCartney’s mad skills and the legacy he had created for himself throughout the ‘60s. He could do no wrong.

“Jet” is a more conventional rock track, though it contains the offbeat line “I thought that the major was a lady suffragette” which is a nod to David Bowie’s great song “Suffragette City.”

It’s the stunning “Let Me Roll It” though that sails ABBEY ROAD era heights for McCartney.

“Bluebird” is a rather forgettable (and annoying) track (though it has its champions) and “No Words” treads water with a song that could have landed on any album from any adult contemporary artist in the 1970s.

There’s a nice lilting quality to “Mamunia” while “Picasso’s Last Words (Drink to Me)” comes off as one of those experimental goofy tracks the Beatles used to drop every now and again.

The album concludes with the solid “Nineteen Hundred and Eighty Five” which, strangely, listening to it from this kind of distance, could fit right in line with the trends and sounds of 1985.

Who knew McCartney was a prophet?

The first disc retains the original U.K. order of the album, relegating “Helen Wheels” (which usually appeared on the actual album for BAND ON THE RUN in the U.S.) to the bonus disc. Other stand-outs on Disc 2 is the B-side “Country Wheels” and variations of the BAND ON THE RUN tracks taken from the McCartney TV special ONE HAND CLAPPING.

The DVD features music videos for “Band on the Run,” “Mamunia” and “Helen Wheels,” in addition to the TV special ONE HAND CLAPPING.

Overall, a pretty impressive package (though the 25th Anniversary of this album features a far better second disc of outtakes from the sessions).

The only other revelation from this nice new re-release, is realizing that the memorable cover art featuring McCartney and others in a prison spotlight actually features notable actors James Coburn and Christopher Lee among others. Now that’s the cherry on top of an already excellent album.