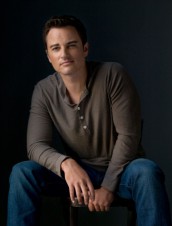 On CW’s LIFE UNEXPECTED, now wrapping out its second and (most likely) final season on Tuesdays, former high school sweethearts Cate (Shiri Appleby) and Nate (Kristoffer Polaha) are brought back together when their now sixteen-year-old daughter Lux (Brittany Robertson) – given up for adoption by Cate at birth – comes back into their lives.

Cate’s now-husband Ryan, played by Kerr Smith, does his best to be the grown-up in the situation, since Lux is chronologically a teenager and Cate and Nate both still sometimes act like they are.

Smith spoke with ASSIGNMENT X about playing it relatively straight on the comedy/drama and his appearance in last year’s MY BLOODY VALENTINE remake.

ASSIGNMENT X: Were you looking to do a television series as opposed to film, or is LIFE UNEXPECTED just what came along at this time?

SMITH: You know, I’ve always wanted to make movies. I love making films, but TV’s been very, very good to me. I’ll never pass up a good TV script.

AX: Is it fun playing the most balanced person on the show, which Ryan arguably is, or do you sort of wish your character could be a little crazier?

AX: So are you looking for ways to make Ryan a little quirkier?

SMITH: We’ll get some of those skeletons in Ryan’s closet to walk out eventually.

AX: Do the show runners encourage you to come to them with thoughts about your character?

SMITH: Oh, yeah, yeah. [Creator] Liz [Tigelaar] is great. Any idea I have, I always bounce off of her, and more times than not, she says, “Yeah, let’s go with it, let’s do it.” She’s great that way. It’s great to work with her.

AX: How do you think you’d react in real life if your significant other said, “I have a child who is now sixteen and who’s coming to live with me”?

SMITH: You know, that’s a tough one. That’s a life-changing event. I can say I’d react one way, but I honestly cannot predict how I would react. I would hope that I’d be supportive and understanding and just give it a shot, but I don’t know. I really don’t know. 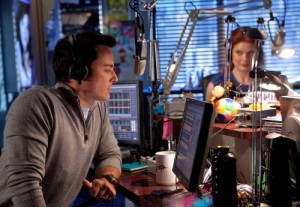 AX: You were a regular on DAWSON’S CREEK on the WB, which merged with UPN to become the CW. I don’t even know if this is something you would notice on the working level, but is working for the CW similar to the WB, or does it feel like working for a different network? Does it have a different vibe from, say, ABC, where you were a regular on ELI STONE?

SMITH: Yeah, it does. I mean, actually, even compared to the WB, the CW feels bigger, you know what I mean? The WB felt more like a baby network, it was just getting started and it was kind of an exciting time. They were looking for new shows to put it on the map, and ours [DAWSON’S CREEK], thank God, was one of them. The CW seems more established. But overall, generally, it feels kind of the same.

AX: Do people still recognize you and come up to you for DAWSON’S CREEK?

SMITH: Oh, yeah. All the time. It’s unbelievable. It’s re-running so many times, it’s like the generation that watched DAWSON’S when it was on the air has now moved on, but the younger generation below that is now watching the reruns like it’s their first time.

AX: What’s your favorite project that you’ve worked on so far?

SMITH: E-RING, absolutely. It had a hell of a cast and to date, it’s been my favorite role to play. I love the Army things. I love playing Special Ops guys and what not, and the creator of that show became a really good friend of mine. I don’t know what happened there. I really don’t, because it was a great show. Anyway, [its cancellation after sixteen episodes] was a bummer for me.

AX: It seems like a fair number of your feature films – MY BLOODY VALENTINE, THE FORSAKEN, FINAL DESTINATION – are in the horror/suspense genre. Do you have a preference for genre or non-genre, or are those just the projects that come along?

SMITH: I’ve been getting a lot of horror thrillers. Is it my first choice? No. I mean, I’d like to do every genre, but sometimes, you just do one and they keep seeing you in that kind of movie. But hey, I’ll take it.

AX: Do you have fun doing the horror movie running around, punching, stabbing …?

SMITH: Yeah, I don’t mind. I mean, Jensen [Ackles of SUPERNATURAL] and I did MY BLOODY VALENTINE last year – that was a lot of fun.

AX: Did you have to do anything special for the 3D aspect of that film?

SMITH: A little bit. When we knew that they were going to be doing some kind of crazy three-dimensional shot, there are specific things they ask you to do – you’ve got to have your hand in a certain place, you’ve got to be totally on your mark. It’s pretty technical.

AX: Did you have any musical numbers in ELI STONE?

SMITH: No, I didn’t. Thank God. They talked about it, and I’m like, “Guys. Please don’t make me do that.” I sing, but I sing to myself. Singing in public – I’m kind of terrified of it, actually.

AX: But now that you’re playing a deejay on LIFE UNEXPECTED, isn’t there a chance that you may have to sing?

SMITH: I guess there’s a possibility, and I guess I’m going to have to get over [the fear of public singing].

AX: Do you have any aspirations to write and/ or direct?

SMITH: Yeah. Actually, I’ve directed episodics before [on DAWSON’S CREEK] and I plan on, if they’ll let me, if they’ll have me, directing some of LIFE UNEXPECTED.

AX: Is it difficult to direct yourself?

SMITH: No. I prefer to minimize my acting in whatever episode I’m directing, just so I can focus on what I need to, but you can do both.