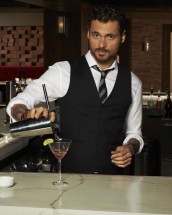 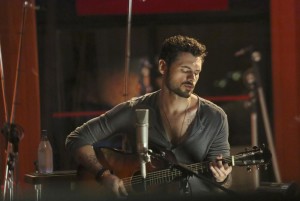 The entirety of the first season of ABC’s new half-hour comedy MIXOLOGY, Wednesdays at 9:30 PM, takes place over the course of one evening at a singles’ bar. We go back and forth in time as we see how various couples do or don’t hook up throughout the night. One of the scripted series’ producers is Ryan Seacrest, who is known largely for his reality fare.

Adan Canto plays MIXOLOGY’s bartender Dominic, a well-intentioned fellow who is a bit clueless when it comes to the expectations prompted by romantic entanglements. Canto spent last season playing serial killer Paul Torres on Fox’s THE FOLLOWING and he’ll be seen soon on the big screen as Roberto da Costa/Sunspot in X-MEN: DAYS OF FUTURE PAST. At an event hosted by ABC for the Television Critics Association, the actor, who originally hails from Coahuila,Mexico, talks about all of these roles.

ASSIGNMENT X: When your role ended on THE FOLLOWING, were you thinking, “I need to do a half-hour comedy just to get myself an emotional change,” or is this just how it worked out?

ADAN CANTO: Well, I definitely was considering comedy, but it worked out this way, fortunately. I think I needed it personally at the same time, because there was a lot of tension with THE FOLLOWING. It was a great experience, but sometimes I would take the character with me back home and I couldn’t sleep for a whole week. A character like this in MIXOLOGY is definitely the other side of the coin. It was a lot of fun and an opportunity to connect with people in an entirely different way, and to just get comfortable in a challenging way also, because I had never worked as a bartender. I’m not much of a party guy, but it was a lot of fun to do. 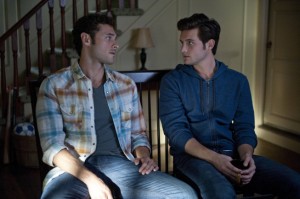 AX: Dominic seems to have no idea that women who he just slept with may get jealous of women he’s flirting with now. Is he just this even-keeled guy who doesn’t understand certain basic reactions?

CANTO: Well, yeah, he’s like that. He’s an easygoing, free-love kind of guy. But because of that, he doesn’t measure the effects of his doings, and the consequences those bring about, which are hilarious. And he’s a genuinely good-hearted guy. He has no mal-intent whatsoever, so it is a lot of fun to see him stumble into circumstances that you wouldn’t predict.

AX: It’s like, somebody comes up and goes, “You’re very cute,” he says, “Thank you,” and they take that as sincere interest …

CANTO: He takes it to heart in a loving way, yeah.

AX: And doesn’t realize that they may expect a little more out of that …

CANTO: Exactly. He doesn’t realize that the girl that he just got with – he’s going to hurt her feelings if he responds to this [other] girl as well. He lives in the moment. He’s just a happy-go-lucky guy, friendly to everybody.

AX: In MIXOLOGY, we see flashbacks for some of the characters …

CANTO: Yeah. I think that’s a great way to empathize with every character. When you see the flashback, you get a soft heart for them. You want them to be okay, at least. It’s a great way to do that and establish that connection.

AX: During the casting process for MIXOLOGY, was anybody worried that someone would recognize you from THE FOLLOWING and think, “Oh, maybe the bartender will turn out to be a killer?”

CANTO: Sometimes the producers or even the extras around the bar would make comments like, “Hey, be careful, he might have a knife down there” or something like that. It was only at the start. It was good. And it was quite interesting how [the casting] happened. I had just flown in fromNew York, and I was the last actor that read for Dominic, the last day, pretty much.

AX: Did you have to learn how to be a bartender?

CANTO: Yeah. I dove into it. I bought the whole set [of cocktail-making paraphernalia]. And back then I would have roommates and I would make cocktails every night. And the next mornings were just interesting all around, but it was a lot of fun to get into that world.

AX: Do you have a favorite bartending move, like throwing a glass or shaking a drink?

CANTO: I like the shaking of it. There are some drinks you don’t have to shake, you can only stir. It’s just the way you do it. I love the shaking – mainly, I love the whole attitude behind it, because [real bartenders are] not really focusing on if they’re doing it correctly. They’re enjoying everything around them – they’re reading everybody at the same time while they’re swiftly making the cocktail. It’s pretty amazing. Because I went to a lot of bars when I was getting prepared for this and I would be amazed at how these guys would prepare themselves.

AX: Were you happy – well, “happy” is probably the wrong word – are you satisfied with the way your character met his end on THE FOLLOWING?

CANTO: I have to say, I was. It was that kind of show. I think by now everybody knows, everybody who was going to be a part of THE FOLLOWING pretty much knew what their fate was [laughs]. Mainly, I wanted it to be strong. I wanted it exactly like Paul, my character, wanted his life to be. He wanted it to mean something, he wanted to establish a mark up there, and I believe we got that.

AX: How was working on X-MEN: DAYS OF FUTURE PAST?

CANTO: That’s amazing. I’m very excited for it to come out. It was a lot of fun to shoot, an entirely different experience, humbling in a great way. Being on a set with that caliber of actors was amazing and having to leave the prejudice behind, like, “This is an amazing actor,” the nervousness, just to be there and have fun with them was amazing.

AX: What can you say about your character?

CANTO: I play Sunspot. I play a mutant, a good mutant. I’m not allowed to say much, but I’m definitely a guy from the future and I play an important role. He exists in the comic books and I did a lot of research with that. I found him, again, a very intricate character with a lot of unfortunate events in his life, and I found it amazing how he keeps his [spirits up] – he’s a positive guy. I cannot believe he’s still alive. Anybody would have lost their faith in the world and life and stepped away, but he’s happy but very strong and passionate.

AX: Is there anything else you’d like to say about MIXOLOGY right now?

CANTO: It’s a great way to laugh at our own reality, at something that really happens. I think the reason why it’s a different show is because it doesn’t try to make people laugh. I don’t think that’s their intention. It mainly brings things that are already there, things that naturally happen, it brings them about, and through a good, different variety of people, of characters, a balance. It takes pretty much what everybody thinks but doesn’t say, or every experience they’ve had in their past, going to bars, but they don’t want to share that, they don’t want to remember it. This show definitely has the ability to recreate it and make people feel embarrassed with their past, but in a good way, [to] laugh at it, remember it and feel great.