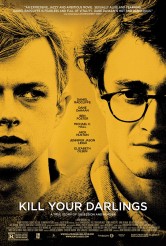 KILL YOUR DARLINGS is advice that essentially means a writer should remove any elements that he or she feels particularly precious about or identifies with too much. In this fact-based film, it also has a more literal interpretation.

It turns out that Allen Ginsberg (Daniel Radcliffe), Jack Kerouac (Jack Huston) and William Burroughs (Ben Foster), right at the time they were finding their way to founding the Beat movement in literature and poetry, also were peripherally involved after the fact in a murder involving two men all of them knew. For Ginsberg, who would become not only an internationally renowned poet but also an ardent advocate of gay rights, the circumstances of the killing (at least as depicted here) presented a terrible clash of ethics and loyalties.

When seventeen-year-old Allen arrives at Columbia University in 1944, he is drawn to charismatic and handsome Lucien Carr (Dane DeHaan). Lucien has a fascinating circle of friends and is full of ideas about setting the literary world (and possibly the actual world) on fire, though he’d rather utter proclamations and let others do the actual writing. Among the people Allen meets through Lucien is David Kammerer (Michael C. Hall), a former college professor turned janitor whose relationship with Lucien is hard to interpret.

It can be tricky to dramatize public figures, especially writers known for big ideas, but director/writer John Krokidas and his co-writer Austin Bunn are less concerned with the future fame of (most of) their characters than they are with the emotional changes they experience within the body of the film. The very complicated dance between all of the protagonists, who are grappling with love, lust, ego, desperation, rejection, envy and need as they carom off each other, is handled with a lot of empathy by the filmmakers. This said, Carr comes off as a specific kind of self-serving narcissist who demands much and reciprocates little, even when he’s aware enough of his own shortcomings to be confounded by them (people who knew the real Carr may be unhappy with this portrait). Very intriguingly, Burroughs seems worldly and even world-weary but not even a little mad, and Kerouac here seems like he could almost as easily slip into the normal life he’s trying out here as take the road we know he ultimately did.

Radcliffe grounds the film, and Ginsberg, with a performance that is immensely likable, warm and vulnerable. The actor helps us feel what Allen is feeling at any given moment, whether he’s yearning for Lucien, fretting over the validity of his writing or trying to cope with his unstable mother (an effective Jennifer Jason Leigh). Without any dialogue to support it, Radcliffe shows us that while Allen greatly resents Hall’s Kammerer, they identify with one another as well. It should be noted that we see Allen losing his virginity in no uncertain terms, so any HARRY POTTER fans who want to see KILL YOUR DARLINGS because of Radcliffe should be old enough to watch this scene.

DeHaan does a marvelous job of making Carr someone we want to slap at the same time we feel for his sense of panic and confusion. Hall takes what could have been a stereotype and turns him into a man who sees himself as stalwart in the face of adversity (the script helps with this by showing us Allen starting to be maneuvered into the same position as David). Huston has an easy authenticity as Kerouac that makes it easy for us to understand his popularity and Foster makes Burroughs a quietly formidable figure who may be caught in the middle most of all – when Kammerer snarls “Traitor” at him, Foster’s wordless reaction gives us a whole back story. Elizabeth Olsen doesn’t get that much to do but does it well as Kerouac’s understandably angry fiancée.

There is a sense of political and moral outrage flowing through KILL YOUR DARLINGS. Its observations on the complexities of relationships – social, romantic, both, indefinable – are as valid for ordinary people as they are for the soon-to-be-celebrated individual defined here, and the ethical/legal issues it raises are sadly still being argued today. We’ve come a long way, though not far enough.

Finally, the movie revels in the fact that Ginsberg not only survived but flourished. Radcliffe’s portrayal of the young man, along with the real Ginsberg’s legacy, makes us cheer right along with the filmmakers.

Related: Interview with the screenwriters of KILL YOUR DARLINGS