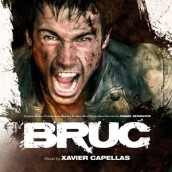 You can likely put the number of Napoleon-ea action scores on a short list, a unique quality that makes the genre open musical territory for Spanish-born (and American-trained) composer Xavier Capellas, who’s handled the scoring chores on such Spanish-funded horror pictures as BEYOND RE-ANIMATOR and FAUST.

BRUC carries as similarly unhinged quality as a Catalonian goes Rambo on the Emperor’s assassins who pursue him through the mountainous wilds of Monteressat, giving Capellas the opportunity to unleash heroic hell in one of the more weirdly off-kilter period scores since Joe Lo Duca’s BROTHERHOOD OF THE WOLF.

Here more symphonically traditional adventure stylings mix it up with modernistic fogs of metallic overload, hushed voices and trembling strings, a tense mist that breaks for the pounding sounds of vengeance and the regional sounds of the duduk and a bouzouki. However, Capellas also allows a spiritual lyricism to paint its dew on the bloody peaks for BRUC’s bits of romance before our noble warrior gets back to the hard-hitting musical business at hand in this engaging score that never once feels dated.