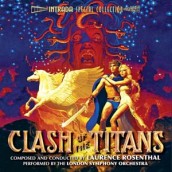 It's time to finally unleash the O.G. Kraken score from Laurence Rosenthal

With no offense to Ramin Djawadi’s rock-fueled percussion that accompanied the more-than-manly, 3-D CGI revamp of this year’s CLASH, it’s likely that Laurence Rosenthal’s symphonically lush, hero-making music of the gods was the stuff that played in Perseus’ ears as he slew Medusa and turned the Kraken to stone.

It’s an old school style that will also forever identify CLASH for a certain geek generation, for whom no amount of cool computer effects will ever replace Ray Harryhausen’s home-made brand of stop-motion wonder, for whom Rosenthal’s score provided a more than worthy send-off.

Now Intrada pays tribute to the alter of the O.G. CLASH with a stupendous release that collects all of Rosenthal’s classic soundtrack onto two CD’s, revealing the true scope of a score that embodied the mythological sense of wonder that made up so much of Harryhausen’s career.

It’s not as if Laurence Rosenthal wasn’t a master of more “sophisticated” fare like BECKET and THE MIRACLE WORKER before CLASH came his way in 1981. Sure Harryhausen was lucky enough to get the likes of Bernard Herrmann, Laurie Johnson and Miklos Rozsa to give weight, let alone towering size to his inch-high monsters.

Now with newfangled effects techniques guaranteeing that CLASH would be the last of its kind (while also ringing in a new wave of epic fantasies like DRAGONSLAYER and KRULL), Rosenthal mustered a true, sweet innocence with this sweeping score, trumpeting music that drew on the kind of timeless grandeur that legends themselves were made of, a rich thematic tradition that embodied fluttering mechanical owls, an angry sea monster and the harpsichord of a snake-haired she-demon, as pitted against the clean-shaven valor of a hero with a good attitude, and romance in his noble heart.

While CLASH’s score was well-represented on its PEG release, the breadth of Rosenthal’s accomplishment is truly stupendous in its entirety here, its highlights revealing even more Wagnerian woe to the villainous Caliban, giving its two-headed monster dog a snarling orchestral attack, and bringing on the siren chorus of Mount Olympus.

With its truly magical sound that made a generation gawk in wide-eyed wonder before kids became too sophisticated, the entirety of the true CLASH score leaves little reason to ask why this will be the opus that Laurence Rosenthal is remembered for, and perhaps Harryhausen himself.