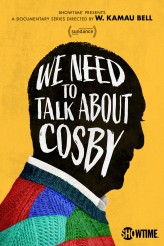 ©2022 Showtime
WE NEED TO TALK ABOUT COSBY Key Art
Interviews 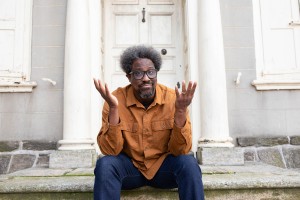 WE NEED TO TALK ABOUT COSBY is a four-episode documentary that premieres its first hour on Showtime Sunday, January 30, with other episodes debuting on subsequent Sundays.

Directed by W. Kamau Bell, WE NEED TO TALK ABOUT COSBY deals with not only the famous comedian-actor-producer-philanthropist-rapist Bill Cosby and the women he attacked, but also with the psychological whiplash his actions produced among the population at large.

People who grew up with THE COSBY SHOW knew Cosby as the man who was the visible face of Black family-centered culture and Black affluence – on the series, Cosby is a respected doctor, and his wife is a lawyer. In real life, Cosby’s activism on behalf of Black civil rights and his support of education at every level made him seem an paragon of benevolent wisdom.

So, Cosby’s audiences understandably had trouble reconciling the fact that a man so many had idolized turned out to be a monster who drugged women in order to render them immobile or unconscious so that he could rape them, and then gaslight them about what had happened.

By the time this information came out, Cosby had already alienated some of his former audience by making public comments that could be construed as attacks on the Black working class and even on fellow performers: WE NEED TO TALK ABOUT COSBY contains a clip of Eddie Murphy in concert, talking about incredulously receiving a phone call from Cosby, who advised the younger comedian to stop using strong language in his act.

In the documentary, we hear from a wide variety of people: women who survived the assaults, people who worked with Cosby, other comedians, experts in comedy, psychology, and law. Archival clips illustrate particular incidents under discussion.

Speaking by Zoom, Bell talks about the hows and whys of WE NEED TO TALK ABOUT COSBY. 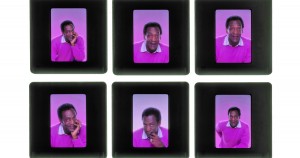 ASSIGNMENT X: What made you feel that we need to talk about Cosby, that you wanted to make this documentary?

W KAMAU BELL: I think that, like many of us who grew up with Bill Cosby as just a part of our lives, especially people of my generation – I don’t remember a time in my life without Bill Cosby, and spent so much of my life thinking of him as an unimpeachable example of good, and funny, and joy, and also morality, struggled with how to deal with what we then learned about him. And throughout the later part of his career struggled with, “Well, who is this Bill Cosby?”

Even if you just go to the Bill Cosby who then does the poundcake speech [in which Cosby seems to suggest that working-class Black people are inclined to shoplift, and also seems to be advocating lethal force against shoplifters] at the NAACP, “That doesn’t seem like the same guy.” And then when you hear about him being a philanderer, which is not illegal, but you’re like, “That doesn’t seem like the guy that I heard, know and love.”

And then you get to the sexual assaults and rapes that I believe he did, it just becomes like … I’m still in large part the kid sitting on my mom’s floor, watching FAT ALBERT AND THE COSBY KIDS. I’m still the guy who will watch a clip of THE COSBY SHOW, and still feel like I’m the eleven- or twelve-year-old who feels like, “I wish I was a part of that family,” and recognizes the importance of it as an adult, how it was centering Black excellence in a way that TV did not generally, and still doesn’t do often enough.

So, I think the Cosby conversations are like a lot of these conversations. Some people want to talk about the sexual assaults and the rapes, which I understand, and some people just want to focus on the good things, which I have a harder time with. So, it felt like, when he went to prison [in 2018], which is when we started making this, “Oh, we can maybe now have the full conversation about Bill Cosby.” And then, as you know, he got out of prison [the conviction was overturned in June 2021 due to a prosecutorial matter explored in the documentary] while we were trying to have that conversation.

AX: Cosby had wealth and fame and popularity going for him, so he could presumably get consensual partners with ease. Instead, he was not only raping women, but tricking them so he could drug them and render them unconscious first. Is there any explanation for the pathology behind that?

BELL: I think we don’t ever sit down and have a whole segment about that, but we thread that through. At one point, Dr. [Barbara] Ziv says, “He was a good-looking man. He probably could have had [consensual] sex with many people.” There was a part where we talk about him as a leading man sex figure, early in his career. And then we talk about, a lot of people heard that he was a philanderer. And we go, “That’s not the problem. If that’s the thing that you’re doing, that’s between you and your spouse.” So, it is there. And then we talk about the ‘60s culture, with “Boys will be boys,” and Roland Martin says, “You could have several affairs, and nobody cares.” The idea being that, throughout the film, we talk about the culture of Hollywood, and the culture of American society, but it’s very much clear that this is clearly bigger than just a guy who wanted to have a lot of sex. There’s something else happening here.

AX: WE NEED TO TALK ABOUT COSBY goes into this a little bit – Cosby seemed to be the first of the famous men who were committing rape and assault who was prosecuted, and it seems like there were white men who were accused of doing much the same thing, who either were prosecuted later, or still have not been prosecuted. Do you feel this was because of Cosby’s race, or just because of a very particular set of circumstances?

BELL: No, I think white supremacy is the rule of America, so white men get prioritized over everyone else. So, even at the highest levels, a Black man who is rich and powerful who commits a crime is still going to suffer probably the brunt of the criminal justice system quicker than a white man who is rich and powerful and commits a crime. But that doesn’t mean that if that Black man commits a crime, we should forgive it because racism is involved in his prosecution. I think that if Bill Cosby was just William Cosby from North Philly and hadn’t been an internationally-known icon and symbol for good, that guy [would still be] in prison right now, and probably in prison a lot earlier. 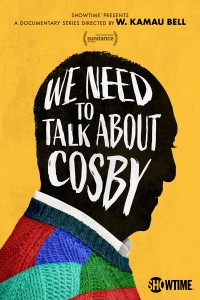 AX: How did you decide who you wanted to interview for WE NEED TO TALK ABOUT COSBY?

BELL: At some point, you interview a bunch of people, you talk to people on the phone, you try to see who wants to do it, you send out cold emails, or cold calls, and then you see who shows up. Certainly, the stack of “nos” is way taller than the stack of “yeses.” And you then look and go, “Well, who do we have? Who do we think we still need, and what kind of person do we need?”

Also, this was all affected by COVID. A lot of this was made through the beginnings and the heat of the meat of the pandemic, although I think we’re still in the meat of the pandemic [laughs]. Because the subject matter is complicated, COVID made it complicated, I’m a first-time director of a project like this, that’s complicated, and at some point, I kept thinking about the TV show CHOPPED. I was thinking, “This is liked a CHOPPED challenge. We just have to make what we can with these ingredients, and do the best we can, and not apologize when we put it out. This is what we made.”

And so, I feel like we did a great job, and the people who did show up were so powerful, especially the survivors, that I couldn’t turn my back on what they did. I wanted to honor that by making sure that this got out in the best form possible.

AX: You directed WE NEED TO TALK ABOUT COSBY. Did you conduct all of the new – that is, not archival – interviews?

BELL: Yes, I did conduct all the interviews. Many of them were over Zooms.

BELL: [laughs] If I’m honest, there are lots of people – because when [Cosby] was in prison, I thought, “Oh, more people will now be ready to have the conversation.” And it was clear very quickly that most of the people are not ready to have the conversation. So, I think luckily, we got Joseph C. Phillips, who was a member of THE COSBY SHOW cast towards the end of the show, luckily, we got Doug E. Doug, who was a key member of the TV show COSBY. So, we have people who worked with him, and we have other people throughout.

But certainly, if you were to say, “Who would you want to hear from?”, we asked all those people, and for various reasons that I understood, and I talked to some of them directly, and I don’t want to say their names, because that’s for them to decide, they came back to me and said, “No.” And I was very clear with them – “I’m not going to give you the hard sell. If you say ‘no,’ it’s no. I get it.”

AX: You were able to find film clips for workarounds for some of the people. Was that easy or hard?

BELL: It’s hard. The real hero of this is our archival producer, Emily Cofrancesco – and her team and the people she worked with, and all the associate editors – but I really look at her as [the primary facilitator in obtaining clips]. We would find something we wanted to use, and then she’d have to go figure out how we were able to use it. Is it fair use, do we go to the source to ask for permission? But with a lot of this stuff, you don’t really want to ask for permission from people who you know are going to say “no,” so there are a lot of workarounds. And thankfully, the fair use laws, because we’re commentating on this, are often on our side often.

AX: Not all, but most of your interview subjects are seated on couches when they’re talking with you. Was that meant to be a visual reminder of THE COSBY SHOW living room?

BELL: Yeah, it is meant to allude to the idea of a place that you think is for comfort that maybe is not as comfortable as you want it to be. You also can’t help but think about what a couch means in Hollywood, and what the history of the couch is in Hollywood. We’re not going to make a big deal out of that, but we’ve been saying, “Is anybody going to notice all these couches?”

At some point, you walk into a location, and you have what you have to give somebody a place to sit down, and there’s any number of things. And you always found that these couches were good silent partners.

BELL: [laughs] I did not come up with the title. We really struggled with the title, so I’m not even sure if the title is a play on that or not. We had been Google doc after Google doc, trying to come up with titles. When somebody presented the title to me, the thing I liked about it is that it is a title that [tells] you that it may not be the Cosby doc that you think that you were going to see.