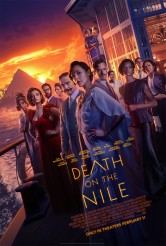 Movie Review: DEATH ON THE NILE 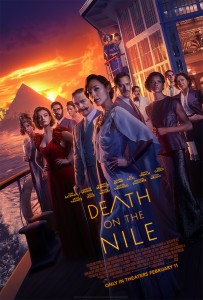 DEATH ON THE NILE was shot on 65mm film, to be projected in some theatres in 70mm. This fact alone may induce viewers to see it on the big screen, as so many films now are shot digitally.

In fact, DEATH ON THE NILE has plenty to offer besides its medium. There’s a reason people keep making (and remaking) Agatha Christie’s murder mystery novels into films. Even if one has seen the 1978 DEATH ON THE NILE, which starred Peter Ustinov as detective Hercule Poirot, and/or read the book, and/or just figured out what has to be happening from the set-up, there’s still fun to be had following the clues and figuring out who did what and why and how the central crime goes unsolved as long as it does.

The new DEATH ON THE NILE is scripted by Michael Green, who also adapted 2017’s previous Poirot mystery MURDER ON THE ORIENT EXPRESS. Like MURDER, DEATH is a bit more emo than we might expect. The film delves into the back story and motivations of Poirot, giving him more pain and empathy than is customary for the character. Purists may be irked, but given the specifics of the story, this fits well with the case.

Poirot is played by Kenneth Branagh, reprising both the role and his directorial duties from MURDER ON THE ORIENT EXPRESS. He performs both with relish, and as director, maintains his usual keen eye for period style.

After a black-and-white prologue set in 1914 during World War I – which suggests that Branagh may want to try his hand at a full-on battle epic again (he did it in his first feature, HENRY V) – we’re in color, at a nightclub in 1937 London.

Here, Poirot runs into his pal Bouc (Tom Bateman), the cheerful erstwhile director of the Orient Express train, who has been sacked. Bouc is now being financially supported by his wealthy, snobbish mother Euphemia (Annette Bening).

While at the nightclub, Poirot witnesses some action on the dance floor, which leads to later drama and tragedy. Jacqueline de Bellefort (Emma Mackey), very much in love with her fiancé Simon Doyle (Armie Hammer), introduces him to her old friend, gorgeous heiress Linnet Ridgeway (Gal Gadot). Jacqueline wants Linnet to give Simon a job as her estate manager.

Oops. Six weeks later, it’s Linnet and Simon enjoying their honeymoon on the Nile, along with a gang of wedding guests. Euphemia and Bouc are among them. When Bouc encounters Poirot at the pyramids, he invites the detective to join the group.

When the title event happens, Poirot is pressed into service. This wouldn’t be an Agatha Christie adaptation if every single character didn’t have some kind of incriminating secret, all of which Poirot uncovers in his search for the killer.

It’s all lovely to look at, with opulent costumes and impressive CGI settings (Morocco doubled for Egypt in the filming). There’s surprising charm in the awkward flirtation between the completely unprepared Poirot and worldly chanteuse Salome. Okonedo is marvelous both onstage (lip-synching to songs performed by Sister Rosette Tharpe) and off.

Gadot has the sort of presence that makes her credible as someone who could seduce a man away from his fiancée and get married within six weeks. Mackey has touching intensity as Jacqueline. And it’s an unexpected bonus to see French and Saunders together in more or less dramatic roles (they do have the occasional comedic line).

There are a couple of actual mistakes. We can almost hear Poirot in our heads, asking, “But if this is a clue we are meant to notice, then what happened to the …?” In particular, there is a missing sound effect that makes the action in the finale confusing. This is made more frustrating because it seems like these issues could have been easily fixed in post-production.

DEATH ON THE NILE has had more time than most movies for post-production, since it was completed in 2020. The triple whammy of Disney purchasing 20th Century Fox, the advent of COVID, and concerns about bad publicity regarding actor Hammer kept things on hold.

The good news is, the delay doesn’t appear related to quality. DEATH ON THE NILE is what it sets out to be: a sumptuously-made, well-acted, traditional puzzle with murder but not much morbidity.