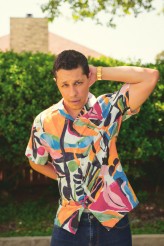 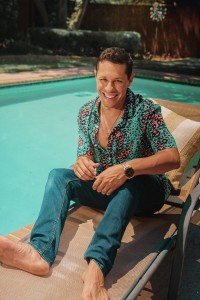 MAGGIE is a new romantic comedy series on Hulu. Rebecca Rittenhouse plays the title role, a psychic by nature and profession. The story starts when Maggie discovers that she is destined to be with Ben, a non-psychic played by David Del Rio.

Originally from Florida and now based in Austin, Texas, Del Rio’s previous acting credits include series regular roles in THE TROOP and THE BAKER AND THE BEAUTY, and the films GREASE LIVE!, PITCH PERFECT, SPARE PARTS, and THE BELKO EXPERIMENT. He is also a multi-hyphenate who also writes, directs, and produces.

Del Rio gets on the phone to talk about his role as a smitten soul in MAGGIE.

ASSIGNMENT X: How did you become involved with MAGGIE? Did you audition, or …?

DAVID DEL RIO: I did, I did. I’m glad you asked it that way, because [it’s not as] if I can go to my door, and then I have to read it in a locked room. I’m literally like every actor, just out there auditioning, and being lucky enough to get a callback, and then being lucky enough to be called again and again, until getting that awesome call [saying the role is a lock]. So, yeah, I definitely auditioned for it.

AX: Did you have a chemistry read with Rebecca Rittenhouse?

DEL RIO: I did. We had it on Zoom, which was kind of weird, but obviously, I’m super-glad that the creators saw something in there. I think what I really enjoyed about the chemistry read with Rebecca, which transcended into us shooting the pilot, and then going right into the series was, we were encouraged to improvise back and forth, within the text that we were getting. It felt like they gave us the opportunity, and it just really ebbed and flowed and continued on that way.

AX: How is your chemistry with Rebecca Rittenhouse?

DEL RIO: It was awesome. I’ve known her just in passing for a couple of years, and when we saw each other again in the screen tests, the chemistry read, it was like, “Oh, my God, it’s good to see you again,” and we still have that relatability feeling that went into the scenes, but Rebecca Rittenhouse is just an absolute pro, and she really carries the show to the mountaintop. She wouldn’t say this, but I’m very proud of her in this project, and being in a scene with her, trying to find the nuances of the will they/won’t they, that’s the thing that we continue to focus on, and in between, we just laugh. So, it’s really, really great working with Rebecca. 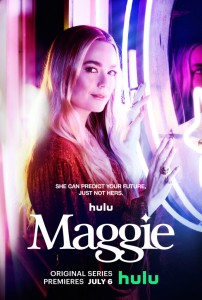 AX: Does Ben know that Maggie is psychic? Does Ben believe that they’re destined to be together?

DEL RIO: That’s really an important question. What surprised me [was that] a part of this story was the idea that Ben is the type of character that, once he meets Maggie and gets immersed hook, line and sinker with her, what I loved about what the writers did was, he completely accepts that she was psychic in a way that kind of takes out the mystical, magical part of it. Ben looks at it and says, “Oh, well, that’s her job. And this is her gift, and this is what she does, and she’s pretty good at it.” And I really enjoyed that.

And all the other characters surrounding Maggie’s life, it’s the idea of how all these friends, and how are we mothers and fathers, or how are we as significant others to a person who’s psychic? And you can’t really tell that story, unless you have characters who don’t comment on the gift as much in every episode, but comment on who the person is as a person. And I think that that was a nice twist to a story like this. Let Maggie’s growing pains of being psychic just belong to Maggie. That’s where it’s great to see Rebecca Rittenhouse play and balance all those things, in terms of playing a character that needs to go through life with this power.

AX: But he accepts that she’s psychic …

DEL RIO: One hundred percent. Which is what I love about it.

DEL RIO: We do get a hint of Ben in the classroom. I think mostly this is a season that we get to introduce the world to these characters, and how they are involved in Maggie’s world. If we are destined, and we are lucky enough to get a Season 2, we’ve had a lot of discussions to explore a little bit more of Ben’s relationships, and Ben’s family, and all that stuff. We get a hint of Ben’s family in the show as well, so we get information on that. Of course, there’s always more to explore.

DEL RIO: It’s funny, because I guest-speak at a lot of classes, and I have been asked to come and speak for classes in various Los Angeles arts schools. I work with this company called Connect Studios in San Jose that fly me from time to time to come in and teach. So, I definitely have a lot of experience teaching. It’s one of my great joys to give back to a lot of the schools, [including] my alma mater, the New York Conservatory of the Dramatic Arts, which is the best I can do in giving back to other actors.

AX: So, you’ve been able to apply your real-life teaching skills to Ben?

DEL RIO: Yeah. I think it’s one of those things – when you’re teaching, you’re learning as well. And so, I brought it to Ben. Ben’s a history teacher and, by the way, history was my favorite subject in school.

AX: When you teach in real life, do you teach acting, or is it a variety of subjects?

DEL RIO: I wish I knew more things, so I could teach a variety of subjects, but yeah, it’s mostly acting, and talking about the industry, and filmmaking in general. At my alma mater, they produce demo reels for the kids who are graduating. They’ve called me to come back and direct over thirty demo reels.

And it is a directing job – I’m a director as well, but it’s also one of those things of talking to kids, and kids asking you questions that have nothing to do with what the real point is in acting in front of a camera, which is just to be authentic, and bring yourself to the character. I like to tell actors in 2022 who are graduating to diminish the hierarchy of acting and just be present, because that’s all the creators want to see from you. Because I’m different to what another person can bring. 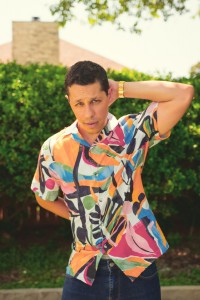 AX: Where did you shoot MAGGIE?

DEL RIO: We shot MAGGIE on the Fox lot in Los Angeles.

AX: Is it single-camera, or multi-camera?

AX: In your own creative work as a writer/director/producer, what kinds of stories do you like to tell?

DEL RIO: I was just talking to a producer friend of mine yesterday, and she told me that – I wrote this down – “Ideas are the bane of everything in this industry.” Meaning that ideas are told again and again. The thing is, there are stories that I’m always going to come across, and me being a cinephile, going, “Well, I’ve seen this kind of thing before.” However, what I’m more interested in is when I talk to a director or producer who’s interested in working with me is, what I want to hear from them is, what is a way that it hasn’t been told before? Television, films, books, art – everything is, in one way or another, going to affect the rest of the world, because in one way or another, it’s relatable. So, I think that, as long as I find stories that are relatable, but in a way that’s never been done before, that’s always the goal of every project that I have.

AX: So, it’s more a matter of, what’s a particularly interesting way to tell this story, than the type of story it is?

DEL RIO: I think it’s both. I try to find a good mixture of the two. If I’ve seen this type of story before, then, of course, not to step on any toes, but I’m more interested in, if we’ve seen this story, is there another way to tell this story, the meaning of it, or is there another line that we can say, because I know I recognize this line from another type of movie, or, I know this story structure, is there a way that we can change this story structure in a way that we haven’t seen before? It’s not always about being innovative, but about, we want to explore different things that we’ve never explored in previous projects. So, we just try to figure out different ways to scratch that itch in uncharted territories in what you have done previously. So, I would say both.

AX: You’re involved with a film called THE BIG FEED. Did you direct that, or are you a producer on it?

DEL RIO: THE BIG FEED is a film that I wrote and produced, along with my friend Fernando Ferro [who directed], and it stars Ivana Rojas and my wife Katherine Del Rio, and that’s slated to come out Halloween of this year. It’s about two best friends who get hired to clean a mansion in the Hollywood Hills for a party, and they realize that the party is for vampires. So, they try to survive the night, using only what they have – cleaning supplies and themselves. It’s an ode to a SHAUN OF THE DEAD type of movie.

AX: With MAGGIE, because you do have a directing background, are you getting to direct any episodes?

DEL RIO: Only time will tell, only time will tell. I definitely do not direct – I was really focused on following the color and tone and the feeling of this world that we’re trying to create through the direction and guidance of Maggie Mull, Natalia Anderson, and Justin Adler. Yeah, if we get picked up for a second season, I’d love to be considered to direct.

AX: So, MAGGIE Season 1 is an open-ended season that could lead to more, it’s not closed-ended?

DEL RIO: Let’s just say that this is not intended to be a miniseries, no.

AX: And what would you most like people to know about MAGGIE the show?

DEL RIO: I think that MAGGIE the show is a mystical, magical romcom that, even though the show is about a psychic, really, it’s about finding yourself, it’s about getting to know who you are, and how to use your gifts to benefit the world around you. It comes with a positive message, with a nice, sweet romcom filter on top.